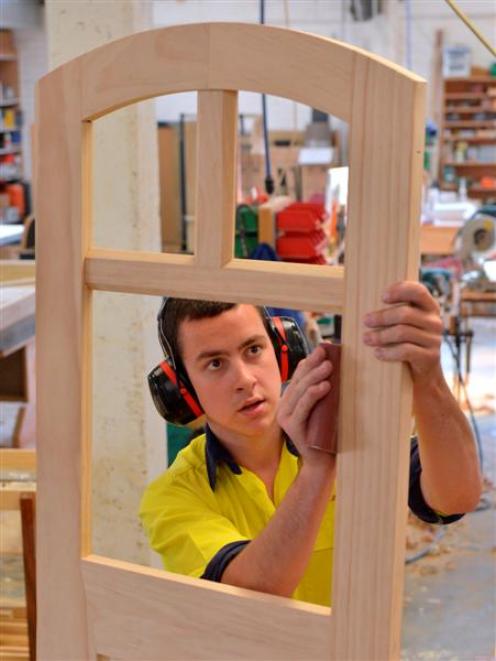 Apprentice joiner James Buchanan sands the door that qualified him for the WorldSkills International Competition in Germany in July. Photo by Gerard O'Brien.
A Dunedin apprentice joiner has been selected for the ''Tool Black'' team to represent New Zealand in Germany.

Leith Joinery worker James Buchanan (21), of Mosgiel, said the gold medals he won at the WorldSkills NZ national finals qualified him for the WorldSkills International Competition in Leipzig, Germany in July.

At the international competition, contestants from 61 countries will compete in 46 trades and must be under 22 years old to qualify. The event was expected to attract about 150,000 spectators to watch the 80,000sq m of competition.

He would be one of 23 joiners from 23 countries competing to finish a couple of joinery projects, each project having to be completed in 11 hours, Mr Buchanan said.

The competitors would not know the project details until the competition, he said.

The joiners would have to use tools such as Japanese saws, chisels and a drop saw. He expected to be working with oak.

The former Taieri College pupil said he decided to pursue a career in joinery about three years ago and started a 4Trades apprenticeship. He had completed 6000 hours of the 8000 required apprenticeship hours, Mr Buchanan said.

He was practising up to 20 hours a week, using plans from past competitions, he said.

Mr Buchanan's boss, Leith Joinery owner Peter Leith, said he would be a judge at the event in Germany but was not allowed to evaluate Mr Buchanan's work.

Competitors at the international competition were future leaders in trades because they had a ''get-up-and-go'' attitude, Mr Leith said.

Otago Chamber of Commerce member Bill Cubitt said he would be helping raise the $30,000 needed to send the pair to the competition.

Fundraising events would include a lunch and an auction of donated goods, Mr Cubitt said.