Arts Festival will be all New Zealand for first time 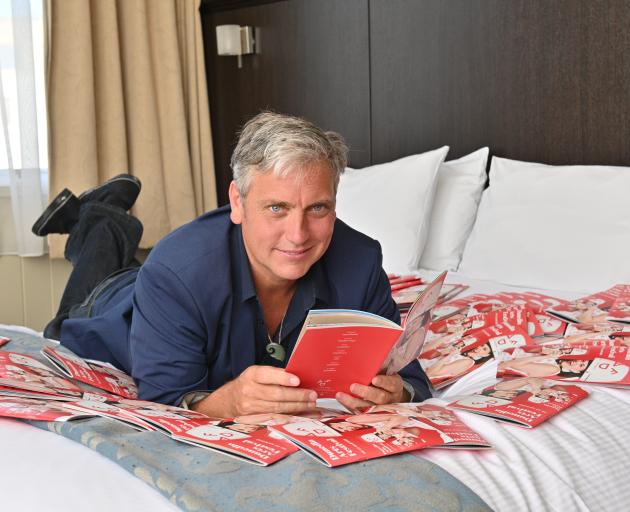 Dunedin Arts Festival director Charlie Unwin browses the festival’s programme at the Scenic Circle Southern Cross Hotel — one of the more unusual venues for the festival, where soprano Fiona McAndrew and pianist David Kelly will perform The Human Voice in a hotel room to an audience of just 20 people. PHOTO: LINDA ROBERTSON
The Dunedin Arts Festival will be like no other this year.

Under the wing of a new director, the programme of the two-yearly festival was launched last night, and for the first time it features all-New Zealand acts.

Many acts also have a close link to Dunedin and the Otago region.

It is take two for the festival after the original dates in October last year were cancelled due to the Covid-19 pandemic.

During the launch at the Dunedin Public Art Gallery yesterday, festival director Charlie Unwin told a crowd of about 150 people that putting the festival together in "this strange Covid world" had not been easy.

Along with having no international artists, the board also became aware that it’s stakeholders, funders and audience would be hurting financially as well.

While there would be an absence of world acts, there would still be "world-class" artists performing , Mr Unwin said.

Dunedin Mayor Aaron Hawkins said it was an opportunity to embrace artists from Aotearoa, including Dunedin’s own backyard.

"This can only be good for our local artists, on the back of what has been a very difficult year for them."

The arts and events industry was one of the first to be affected by the coronavirus, and uncertainty around alert levels and international restrictions continued to make it challenging, he said.

Mr Unwin said the decision to reschedule to April, rather than October, meant it would coincide with some other festivals and a schedule of wildlife-themed events, including the Festival of Colour, Fringe Festival, and Wild Dunedin.

The idea was to create a "festival vibe at the bottom of the South".

He hoped that would help build momentum for the arts, at a time when people had been hanging out for their to return, after the limitations of Covid-19 alert levels.

"I do think there will be a very good uptake having all the festivals together — one plus one equals three," he said.

Country singer Tami Neilson will also bring her new show The F Word , which explores the history of feminism in country music, and Dunedin band The Chills will perform at Larnach Castle.

Mr Unwin said the goal was to put together a programme that reflected Dunedin’s diverse community and made it as accessible as possible by spreading the more than 30 acts across 20 days, rather than the previous 10 days.

"There is also a lot of cheaper events — a lot of free events."

The launch had been a long time coming for Mr Unwin, who was appointed festival director in May 2019.

"I am really really excited to get it out there and to hand it over to the people of Dunedin — it is their festival," he said.

During the launch, he thanked his predecessor and founding director Nicholas McBryde for handing over his "baby" and promised to take good care of it.