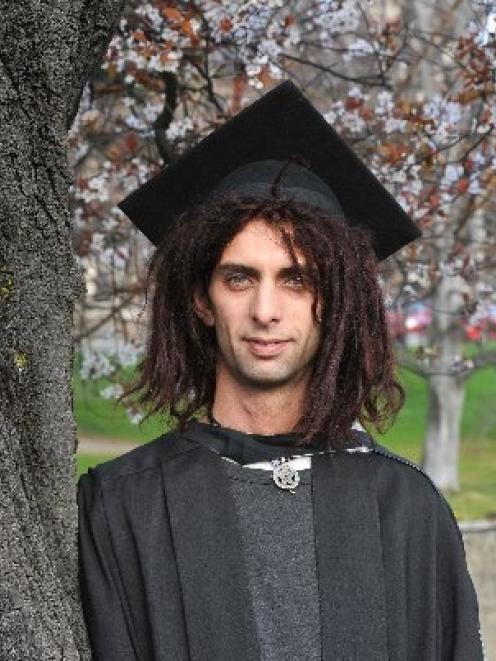 And he has had to overcome some extraordinary personal challenges along the way, but had also gained a job in a Dunedin law firm.

''It's been the longest, longest road and I never thought I'd ever get there,'' Mr Ushaw said.

Mr Ushaw (32) will be among about 350 graduands who graduate today.

He comes from a low income background in Otara, South Auckland.

About 13 years ago, his parents, Daniel and Julie Nolan, moved to Southland, and parts of rural Otago, including Waipori Falls, in search of cheaper housing and better times but life had since remained fairly tough for them, he said.

''They struggled all the way through.''

''She was a hard worker. I may have got my work ethic from my mum.''

Mr Ushaw had been still living in Auckland and had recently shifted to a flat in Manurewa in early 2001, when a flatmate attacked him with an axe handle, as he lay sleeping, fracturing his skull and causing brain damage.

A Manurewa man, then aged 19, was subsequently sentenced to five and a-half years' imprisonment for the vicious attack on March 4, 2001, after a perceived slight.

After two weeks in a coma, Mr Ushaw woke up in Middlemore Hospital.

But it took quite a while for his normal faculties to return: initially he spoke with a stutter and had to retrain by reading children's books.

Heading south to be closer to his parents, he spent three months recovering in Wakari Hospital's Isis Community Rehabilitation Unit, and then spent six months in supported living, also in Dunedin, receiving help from nurses.

He vividly remembers waking up one morning and deciding he wanted to study philosophy.

The initial reaction of his carers was: ''You've had a head injury, you can't do philosophy''.

But he was determined and, with the start of extensive ''fantastic'' help from the Otago University Disability and Information Support service, including lecture note-takers, he passed his first philosophy paper that year, with a B-plus grade.

And after more years of hard part-time study, he eventually completed a BA in philosophy.

He was later invited to study law, and realised he faced a tough challenge, including having little money, and the challenge of highly competitive entry into the later second year of law.

And he worked hard all that ''extremely intense'' first year - ''I just wanted it so bad.''

Later, he made it into second year and was proving successful with his legal studies, although he had to work four hours a day at the university, changing lighting tubes throughout the campus from 7.30am, in order to survive financially.

Other law students from more comfortable backgrounds were eating sushi for lunch - he was eating baked beans.

In the midst of his growing success, the second big blow struck.

His parents had just moved to Mataura in late 2010, when his mother, aged 48, died suddenly, of a heart attack.

But unfailing strong support from staff at the Otago Law Faculty brought him back to law, and he completed his studies last year.

''I'm the poorest lawyer that ever was - I still am,'' he said with a wry smile.

But, despite huge odds, he has completed two university degrees and was now ''absolutely stoked'' as he looked forward to a graduation his father would be attending.'I'm proud for my mum and I'm proud for my dad.''

• This is the first Otago graduation ceremony held in the town hall after an extensive refurbishment was recently completed. Graduations have been held at the Regent Theatre since August 2011.