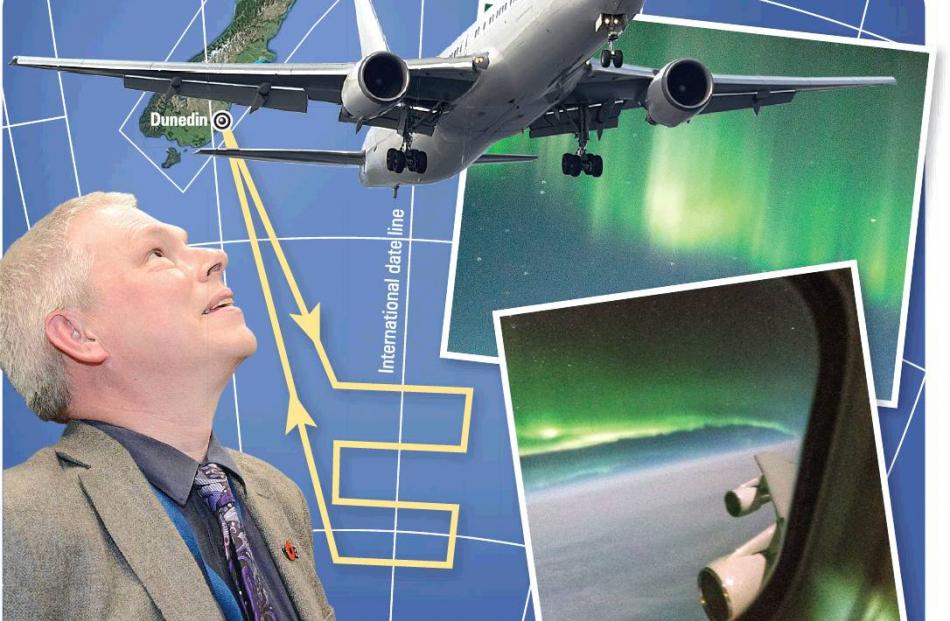 Otago Museum director Ian Griffin. The aurora australis flight from Dunedin will be the first of its kind in the southern hemisphere. Graphic: ODT

Seat sales on the first charter flight from Dunedin to see the aurora australis are taking off - so much so, the trip's organiser is already considering making the flight an annual event.

Otago Museum director and former Nasa Space Telescope Science Institute public outreach head Ian Griffin said the flight was confirmed for March 23, and would be the first of its kind in the southern hemisphere.

However, he declined to say how many had been sold so far.

''Obviously, my main focus is to get this flight off the ground first, but we're genuinely trying to do something different for Dunedin here, and hopefully we can pull it off.''

Dr Griffin said the ultimate aim was to make the aurora australis flights a tourist attraction, by making it an annual flight that people from around the globe could go on.

He said the seven-hour flight would take advantage of the equinox aurora effect, when there would be 12 hours of daylight and 12 hours of darkness.

The flight would leave Dunedin airport about 9pm and return at 4am or 5am the next day.

''It's very, very likely we will see an aurora, as the flight is heading to 62deg south on the last leg.

''Lights will be off full time on the flight so we should get lovely views of the Milky Way rising in the early part of the flight.''

The proposed flight plan would take the plane - likely to be a Boeing 767 - across the international dateline four times as it zig-zagged back and forth, so people on both sides of the aircraft could get a good view of the aurora australis, he said.

Because the tickets were being sold as ''window seat pairs'', it meant the buyer could take someone with them and swap seats.

''The reason for selling pairs of seats is that we don't want to have issues with people fighting about who sits next to the window. The assumption is, people who buy a pair of seats will sort it out beforehand.''

There would only be about 150 seats available, priced at $3950 per pair of window seats in economy, and $8500 per pair in business class. There would be full food and drink service on the flight, he said.