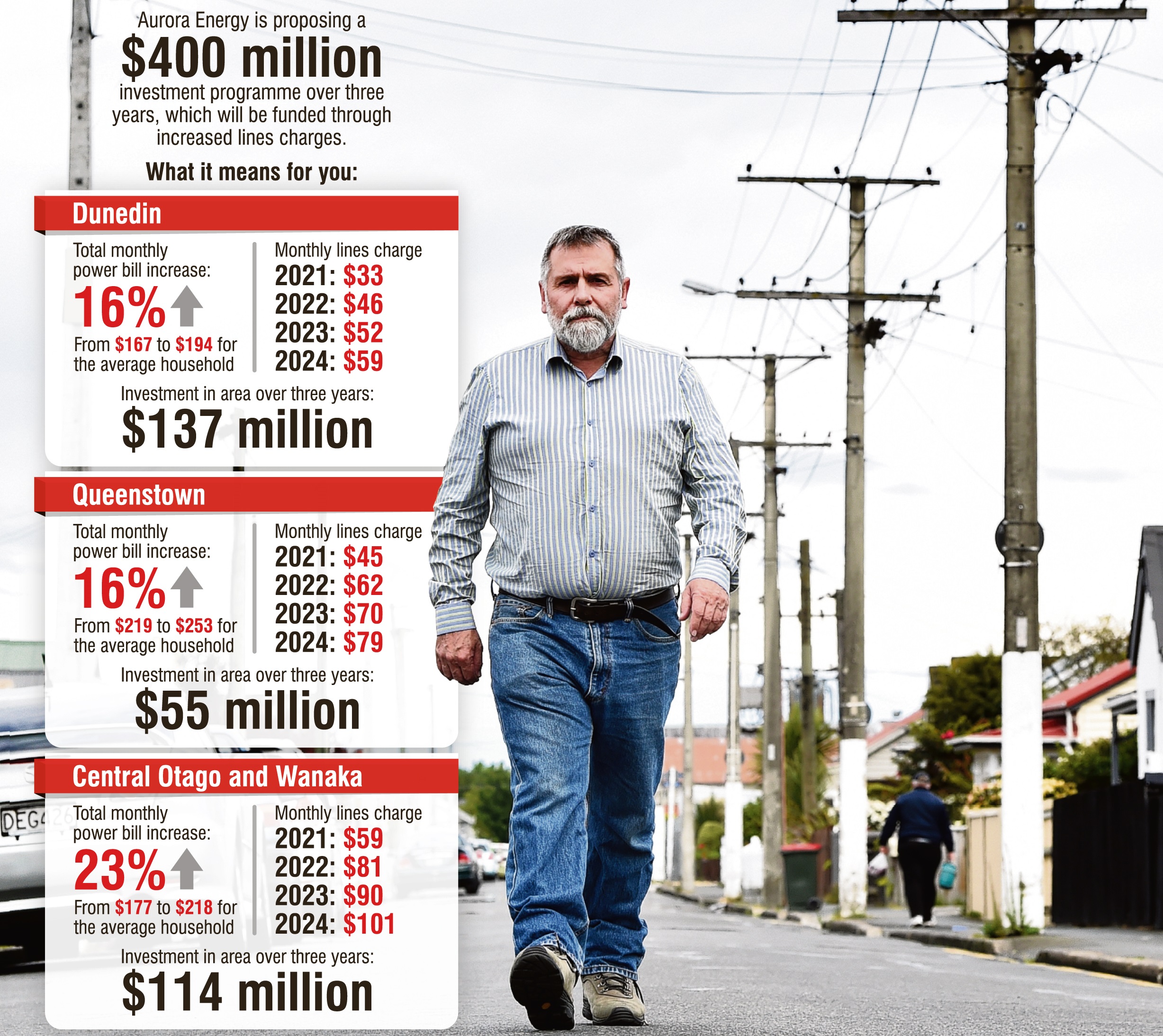 Aurora Energy whistleblower Richard Healey, pictured walking down Bradshaw St in South Dunedin, was unimpressed with yesterday’s pricing announcement. Photo: Peter McIntosh
Power price hikes of up to $500 a year are a result of ''deliberate and sustained negligence'', a Dunedin MP says.

Aurora chief executive Dr Richard Fletcher said the proposed plan was about the ''prudent investment that is essential to meet the needs of our communities now and into our future, to address the errors of the past and position the network for its future use''.

The announcement has come under fire from both Dunedin South MP Clare Curran and Queenstown Lakes District Mayor Jim Boult.

The increases were the result of years of under-investment in basic infrastructure by a council-controlled company that had never been held accountable for its negligence, she said.

''In my view, Aurora has stuffed up big time and their plan is not prudent. It's deliberate and sustained negligence.''

She said the price increases were well flagged, but not by Aurora or by its owner, the Dunedin City Council.

''Instead, it took the research work of a former employee turned whistleblower to warn people that big price increases were coming.''

That whistleblower was Richard Healey, who yesterday said his reaction to the report was ''despair''.

''For three years, I've been predicting that this is coming - not only that it was coming but the degree of harm that this was going to cause.

''It's one of those days where you just don't want to be right.

''Energy poverty is a real thing and this is going to spread it.''

Meanwhile, Queenstown's council is preparing to fight the proposal.

Mr Boult said the increase was ''in large part a result of highly inflated dividends'' paid by Aurora to the Dunedin City Council.

''I would suggest this money should have been invested more wisely in maintaining and improving Aurora's infrastructure and, if it had been, this situation would not be before us now,'' he said.

He believed the Dunedin council should consider a capital contribution to Aurora to help address the infrastructure issue.

He had asked staff to prepare a submission to the Commerce Commission strongly opposing the proposal.

Central Otago Mayor Tim Cadogan also had reservations, saying while the community had been clear with Aurora about the need for infrastructure improvements, he was concerned about the impact of significant price increases.

Dunedin Mayor Aaron Hawkins agreed there would be some households that struggled to absorb the cost, but because price increases would not take effect until July 2021, there would be time to look at ''how we can make it easier, through supporting more energy-efficient housing, for example''.

He acknowledged it was a more sudden change than it could have been, but said it was important to note line charges would have increased whenever the work had happened.

''It's also about more than playing catch-up - it's future-proofing the network.

''Electrification is going [to] play a big role in our zero-carbon transition, and we need to make sure our infrastructure isn't an obstacle to that.''

Dr Fletcher said the company acknowledged the price rise would be difficult for some customers. But the alternative was a continued deterioration in the safety and the reliability of the networks, he said.

''In Aurora Energy's case, low levels of investment in the intervening decades has helped keep line charges lower than the national average but has led to a gradual deterioration of the electricity networks which power our communities and economy.''

Across the entire network, the monthly total electricity bill was expected to increase on average by 18% for households.

The proposal will form part of Aurora's application to the commission, for a customised price-quality path rather than staying on a default price path, expected to take effect from April 1 2021.

Luckily I was able to avail myself of Aurora's generosity last Sunday when they brought a few Subway sandwiches and biscuits for us locals in Portobello, so that's my $250 increase covered.

Dcc-Auroa should use all this cash saved up to invest back into services that everyone will benefit from and be happier and live better. I don't think a fantasy bridge and a George St cycleway and other projects the create mass co2 pollution will improve living conditions of those that struggle but DCC do have a tendency for listening to the minority and ignoring the funders of there fantasy projects : Ratepayers. But hey it won't effect or Sue or Richard so onward forward
Sigh...

"Hawkins agreed there would be some households that struggled to absorb the cost, but because price increases would not take effect until July 2021, there would be time to look at ''how we can make it easier, through supporting more energy-efficient housing, for example''
What's that going to do for those on low incomes and renting, it will just help the landlords houses and they increase rents, just shows this guy doesn't have a clue.

Why are journalists not asking Aurora, (or their shareholder and board, the DCC), what happened to the money that should have been spent on upgrading infrastructure in the past?

It's not like we've had cheaper power because they haven't built maintenance charges into the price. Where did that money go? We all deserve to know! Were there abnormally high shareholder returns? It appears not. Was there inefficiency or fraud? Where is the independent report that states: "compared to other local lines providers in the country Aurora had above average ??? costs for a period of ??? equating to a total of ???.

It is simply not okay to expect to receive such a significant amount more via higher charges without accountability for up to FOUR HUNDRED MILLION DOLLARS!!!! in underspending!

WHERE DID IT GO? WHO IS ACCOUNTABLE? WHAT CHANGES HAVE BEEN MADE TO AVOID THIS AGAIN?

Given that electricity users in small towns in Central Otago are already facing $90 bills without using any electricity these increases will be a big burden.

The 3 CEOs (Aurora, Delta & Dunedin) are the winners; they should be thanking us for blindly funding their non-market salary packages. Where in the private/real world does someone earn $500k approx, where there is no funding pressures?- just a gravy train because most voters do not object to wonton waste.

Would not be surprised to see an increase in crime with the increased power charges, people need power and some will try to resort to extreme measures to pay for it. Aurora and DCC are SEVERELY underestimating the amount of people these price rises will seriously affect...

Maybe Delta and Aurora need new CEO's, again. People who will take a pay cut of $200,000 - $300,000 in order to try help the financial situation a bit more. $200k a year is still a hell of a lot of money, and anyone who says they can't survive on that amount is clearly the wrong person for the job.

Sick of hearing the "oh we need to pay CEO's this much because otherwise we won't get the right people" line all the time. GREED, is the word we're looking for here (in a situation like this) as you don't apply for a job at a struggling company while demanding a half million dollar salary if you're not greedy, simple as that. A person who genuinely wants to try turn it around will take a huge pay cut to help out, at least until it's back into the black. They can get their large paycheck back when they've fixed the company...