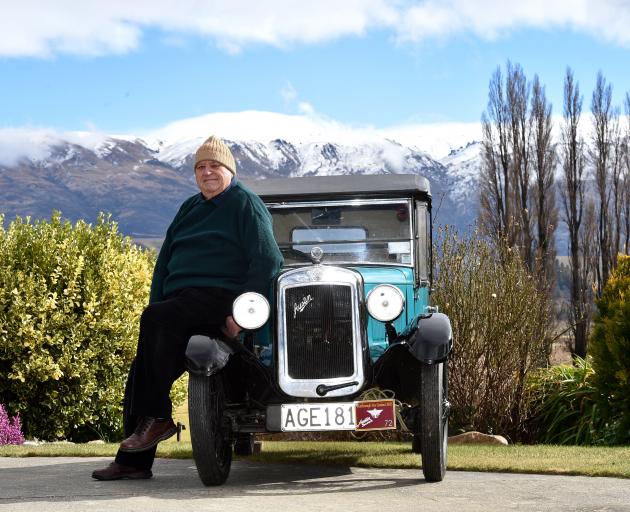 Ken Brown, of Cromwell, with his 1930 Austin 7 Chummy car, which will re-enact an epic road trip in November. PHOTO: GREGOR RICHARDSON
The same Austin 7 car which made a "mad dash" return road trip from Dunedin to celebrate the extended Haast road's opening in 1965 will do it again soon.

It was a "buzz" that the original 40-hour 1255km trip would be repeated this November, and the original car could be joined by up to about 13 other Austins at various points on the trip, David Mills said.

"It's going to be tiring, but I'm convinced that we can do it," Mr Mills, the Dunedin trip organiser, said.

A major International Vintage Car Rally had been held in New Zealand early in 1965.

Participants were to travel down the West Coast from Christchurch, via what was to be the completed Haast road to Wanaka, but the road was not yet finished.

Hearing about the opening, two "Dunedin characters", rally participants Les Nye and Gordon Sharpe, chose to make a "mad dash" - attending the opening and returning to Dunedin via the new stretch of road.

The duo set out at from the city on at 4am on Friday November 5, in Mr Nye's 1930 Austin 7 Chummy car, travelling via Dunsandel, Springfield and Porters Pass.

They reached Arthurs Pass at noon, sharing the driving, and stopping only for food and fuel.

After reaching Hokitika, they camped overnight and next morning assembled with everyone else for the opening, in pouring rain.

After the ribbon was cut, the Austin moved ahead of the prime minister's entourage, and travelled non-stop via Wanaka, Cromwell, Roxburgh and Milton, reaching Dunedin at 8pm on Saturday.

Robert Trompetter, of Dunedin, will drive the original car - made available by its owner, Mr Nye's nephew Ken Brown, of Cromwell - in the re-enactment run on Friday, November 8.

The re-enacted "Mad Dash to Haast" would leave Dunedin from Wilsons Distillery building at 4am that day, following the original route, but staying at Lake Paringa, 50km north of Haast.

Anyone with a car with an Austin label could participate, but had to arrange their own accommodation, he said.