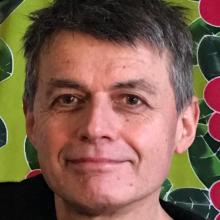 Mr Eggleton was awarded the scholarship in July last year.

He originally intended spending the spring semester (February-May) at the Centre for Pacific Islands Studies at the University of Hawaii at Monoa in Honolulu, but writing projects and other commitments meant he had to delay taking up the residency until now. A former factory labourer and city council gardener, Mr Eggleton is now a full-time editor, poet, art critic, reviewer and freelance journalist. Of Rotuman, Tongan and Palagi descent, he grew up in Fiji and South Auckland and lives in Dunedin.

He intends using the $30,000 award to complete a collection of poems exploring his Pasifika heritage.

"I hope to research and begin a prose memoir about my mother’s extended family, my cousins, scattered across the Pacific," Mr Eggleton said when his scholarship was announced last year.

"My Pasifika heritage runs all through my writing from the beginning as part of my personal context and background and I have always drawn from this heritage and history, but not necessarily overtly: instead it is there as a presence or part of a dialogue with ideas about cultural crossover," he said.

The Fulbright-Creative New Zealand Pacific Writers’ Residency is for a mid-career or senior New Zealand writer of Pacific heritage to carry out work on a creative writing project exploring Pacific identity, culture or history at the University of Hawaii for three months. One award valued at $30,000 is granted each year, to be put towards the costs of three months’ writing.

Mr Eggleton expects to be away until the end of November.