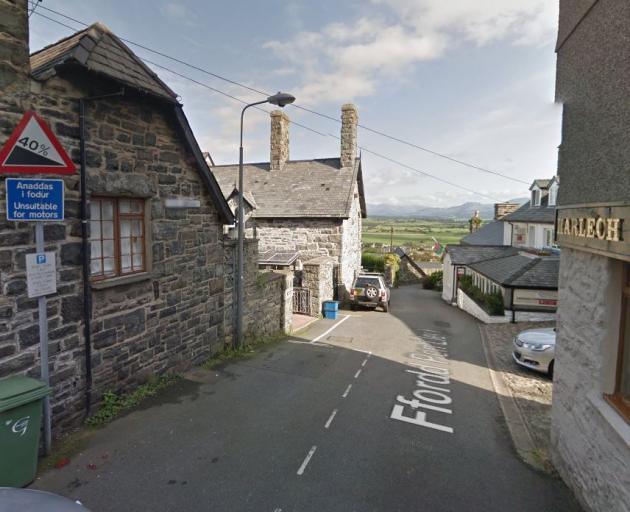 A Welsh bid to unseat Baldwin St as the world's steepest is thought to be only a few days away from being officially decided.

Residents of the small seaside town of Harlech in North Wales are confident their street, Pen Ffordd Llech, is the world's steepest.

At its steepest, Baldwin St's world record gradient stands at 36%, but the Harlech residents claim their winding narrow street has a gradient of about 37%.

One of the leading voices behind the bid, Gwyn Headley, said the application was officially submitted to the Guinness World Records last Tuesday.

They should know by Wednesday if they were successful, Mr Headley said.

A surveyor appointed by the Gwynedd Council found the steepest 10m section of Ffordd Pen Llech was 37.4% - making it steeper than Baldwin St.

Unlike Baldwin St, Ffordd Pen Llech is a single-lane road for most of its length, so vehicles do not meet midway on the curving slope and are unable to restart.

As well as residential properties, the street contains a shop, a restaurant, a caravan park and Harlech Castle, which is a Unesco World Heritage site.

It is thought to be more than 700 years old.

Guinness World Records guidelines state to be eligible for the steepest-street record, the road must be open to both pedestrians and motorised traffic.

It is also based on the maximum gradient over a 10m span, comparing the vertical rise to the horizontal distance.

A Guinness World Records spokeswoman said all bids were confidential until they were approved record titles.

The requirements for the steepest street category were thorough and required elements such as blueprints and surveyor's reports, she said.

Once a record was approved it would appear on the organisation's website.