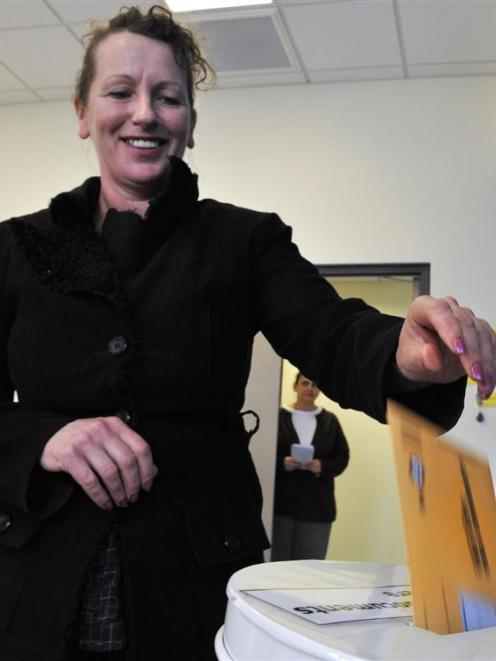 The polls close at midday today, with the new face of the country's councils due to become clear as the weekend progresses.

Dunedin electoral officer Pam Jordan said late yesterday she had just bundled up and sent by courier to electionz.com in Christchurch 1245 voting documents collected during what had been an "exceedingly busy day".

While the election was by postal vote, one ballot box was set up at the Civic Centre in Dunedin for people who did not post in time, and for special votes.

But many campaigns have been blighted by "nasty" personal attacks on candidates, particularly in Tauranga, Nelson, Masterton and Auckland, Chief Electoral Officer Warwick Lamp said.

There appeared to be more "American-style campaigning, where you attack the credibility of the other person", he said.

Despite that, countrywide voter turnout has risen 5%-10%, with the biggest leap in Auckland, up 15% from past elections to almost 50% by yesterday, surpassing Wellington which had just under 33%.

Manakau's Len Brown is leading Auckland Mayor John Banks in the polls for one of the most powerful positions in New Zealand as Auckland is unified into a single city.

In Christchurch, the battle between Mayor Bob Parker and MP Jim Anderton had also attracted high interest, with nearly 50% of eligible residents voting - "the highest return I think they've ever had", said Mr Lamp, who runs elections for several councils and manages the Electionz website.

Mr Parker's support has risen from 36% to 48.5% compared toMr Anderton's 35.5% since the Canterbury earthquake.

This year's election has been characterised by enrolment scams in south Auckland, rocks through the window in Nelson and assault charges against Wellington mayoral candidate Bernard O'Shaughnessy.