Be your best, boys told 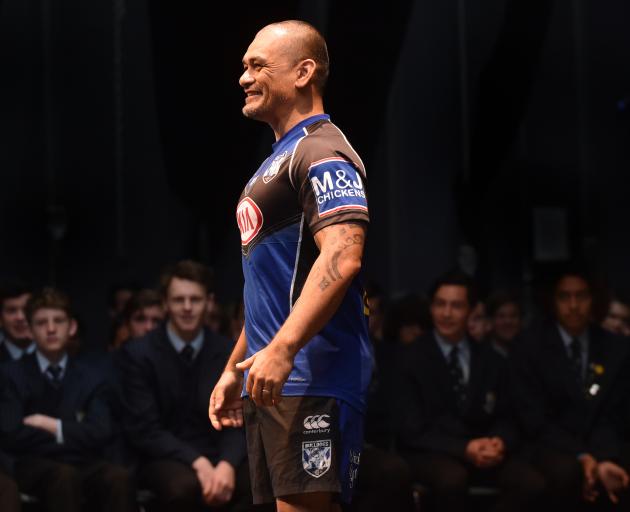 Canterbury Bulldogs athletic performance director Donald Singe was in a league of his own yesterday when he gave an inspirational speech to pupils at his alma mater.

The former King’s High School pupil is in Dunedin with the Canterbury Bulldogs, who will play the Warriors at Forsyth Barr Stadium tonight.

The pupils were totally engaged by Singe’s informal talk and  anecdotes.

Singe (50)  recounted a time when he and good friend, Bulldogs head coach Des Hasler, were in Japan.

Singe (who speaks a little Japanese) introduced Hasler (who does not) to a group of Japanese rugby officials, telling them in Japanese that Hasler used to be a woman.

"Hasler just nodded ... with his long hair. It wasn’t until five months later that he found out what I had said."

Singe said he was still paying for the gag.

Following the assembly, he said the main reason for his visit to King’s High School was to inspire its  pupils and show them that success was not always instant.

He told them he was not the most studious of pupils.

"I got caned a few times here.

"I wanted to tell them that sometimes people aren’t ready to excel right now.

"But if you work at the pillars and foundation of what you have here at the school, then like myself, excelling in different fields will come later.

"The real message I wanted to say to the boys is, whatever path you choose, as long as you’re the best that you can be and you keep up your communication skills and your ability to engage with people, you’re always going to be successful.

"Being able to communicate and engage people is a dying art."

Singe, son of  late radio and television personality, former Evening Star news editor and Otago regional councillor Miles Singe, joined the Royal New Zealand Navy after leaving school,  then started his fitness career at the YMCA in Dunedin before moving to Australia with his wife to pursue a career in the fitness industry.

He was the head of performance and strength and conditioning with the  Sea Eagles from 2003 until 2015, when the team played four grand finals and won two premiership titles.

Now, he is the director of athletic performance for the  Bulldogs, and is the high-performance coach for the Kiwi international rugby league side that will compete in the Rugby League World Cup this year.

"I’ve enjoyed the years of my profession, of being able to exert all my personality and motivation skills, alongside my academic skills."