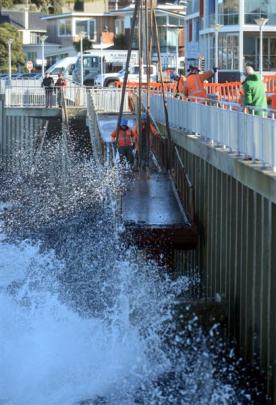 Fulton Hogan contractors use a crane to remove a damaged section of ramp from the Esplanade at St Clair seawall yesterday. Photo by Peter McIntosh.

A 12-tonne concrete ramp that ''unhinged'' from the St Clair seawall in this week's heavy seas risked damaging the wall as it swung loose, the Dunedin City Council says.

Fulton Hogan contractors removed the ramp section yesterday afternoon, during a lull in the weather before more big seas, expected next week, he said.

The ramp - leading from the Esplanade at St Clair down to the beach - had been closed following damage two years ago.

The bottom two sections were removed and the rest of the structure cordoned off.

However, this week's swells, considered the largest to hit the coast in the past 15 years, caused the lowest remaining section of the ramp to work loose, Mr Standring said.

Bolts holding the section of ramp in place had fallen off and disappeared, and the structure had ''come adrift from its moorings'', he said.

''In heavy seas, there's potential for a big hunk of concrete like that to do some damage to the actual wall itself.

It was not clear exactly how far the ramp section had been moving as it was pounded by waves, but there were definitely ''signs of movement'', he said.

''It had actually gone out and come back in. It was sitting about 100mm out from where it was supposed to. It must have jumped higher than that to get the bolts out.''

The loose ramp had ''potentially'' been a threat to public safety, although access was restricted, he said.

Access from the Esplanade was fenced off, and while people could get underneath the dangling structure at low tide, the damaged section would have been moving only when waves were able to reach it, he said.

The rest of the ramp was already scheduled to be removed later this year, as part of wider work that would include the removal of three staircases to the beach as well, he said.

The work would be carried out as planned during the next six months, he said.

The weather-induced failure had not caused damage to the wall itself but bringing forward the removal of the section of ramp had cost the council up to $10,000, Mr Standring said.

Damage to the St Clair Surf Life Saving Club's nearby access ramp had also been noted, and would need to be repaired next week, along with more work to add sheet piling to protect the sea wall, he said.