Beacon pops up to save fishermen 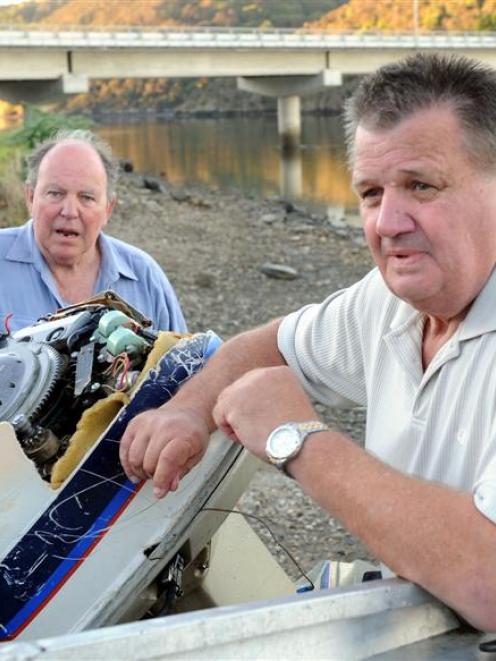 Jack Pegg (left) and Warren White with Mr White's boat, which was lifted off the Taieri bar by helicopter (below) yesterday. Photo by Stephen Jaquiery
The value of taking a locator beacon on fishing trips was driven home to two friends when they were tossed into the sea after their boat overturned on the bar at Taieri Mouth, south of Dunedin, yesterday.

Last night, the men, helicopter rescue staff and the New Zealand Rescue Co-ordination Centre all agreed the pair's story would probably have had a different ending had they not made a spur-of-the-moment decision to take a locator beacon with them before heading out to sea.

Awakening to a beautiful calm day, retired Abbotsford man Jack Pegg, who turned 66 yesterday, called his next-door neighbour and fellow retiree, Warren White (also 66), and suggested they go fishing - just as they had dozens of times since they became neighbours about five years
ago.

As they crossed the notoriously tricky Taieri Mouth bar in Mr White's 5m aluminium fishing boat about 9.45am, the vessel was rolled by what Mr White described as a ''random, huge, vertical'' wave.

A second similar wave then swamped the boat.

The pair stayed with the boat, which was grounded and half-submerged on the bar near Taieri Island, for a short while, but the coldness of the water forced them to swim for the island.

The cold, the breaking waves, an undercurrent and the buoyancy of their life-jackets meant it took them about an hour to swim the 100m to the island, Mr Pegg said.

''I couldn't have got much further. I was basically buggered. If I didn't have that life jacket on, I would have been done for.''

Once they reached land, they sat on the island for a few hours wondering what to do next. They had lost their cellphones in the capsize and were aware no-one would worry about them for at least another four hours.

''I said to Warren,`Do you know, the funniest thing is I chucked the epirb [locator beacon] in too, but it's in the boat'. Then he looked down and here's the epirb floating in the surf.''

They set off the beacon, which uses a signal bounced off satellites to alert the Wellington-based New Zealand Rescue Co-ordination Centre, and the pair were rescued by a crew from the Otago Regional Rescue Helicopter about 2pm.

Once in the air, the helicopter crew was able to track the epirb signal and locate the men, Helicopters Otago managing director Graeme Gale said.

The two men were winched up into the helicopter, checked by a paramedic and taken home before they returned to watch the boat being lifted back on to the ramp at Taieri Mouth.

The rescue showed how vital it was to carry locator beacons while going to sea, not to mention tramping, hunting or mountain-climbing, Mr Gale said.

''A lot of people don't see the value in them, but these two people might have still been floundering out there,'' he said.

''These things save lives. We just can't say enough about them.''

That message has certainly got through to the Pegg and White families.

''I'll be updating this when I have to and I'll be upgrading, too,'' said Mr Pegg.

Mrs White said people baulked at the price of beacons, but after yesterday's drama she knew every boatie should have one.