'Beer for her' wins medal 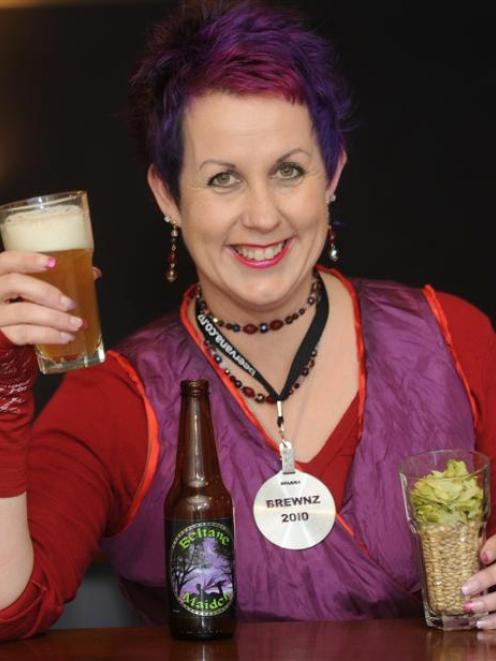 Beltane Brewery owner Vicki-Maree Yarker in Dunedin yesterday. Photo by Peter McIntosh.
Beer is about to become more feminine and "sexy", if an Otago brewer has her way.

Beltane Brewery owner Vicki-Maree Yarker won a medal at the BrewNZ Awards in Wellington last week for a special brew she developed specifically for women.

Her Beltane Maiden was awarded the silver medal in the flavoured and aged styles category.

"It was the first time I'd entered a competition. There was no trial batch or anything," Ms Yarker said yesterday of her Belgian whit (white) style beer.

"I got cancer about four years ago and had a bucket list of things I wanted to do, and brewing a beer for women was one of them.

"There's definitely a market for craft beers for women.

It's just as luscious as wine, but women need to know more about it, so I thought, `Let's brew a beer for a female palate'.

"It's just as complex as wine. Out of four elements - water, hops, malt and yeast - you can get so many amazing tastes, like chocolate, passion fruit and banana. It's amazing. It's got just as complex a top note as a really good wine," she said.

"Beer can be a very sexy drink, but you have to architect the taste. Before making Beltane Maiden, we thought about it and researched it and had focus groups. This beer was built for women. It has citrus layers, complexities and characteristics.

"Women don't like bitterness in beer as much as gentlemen, because we have more taste buds at the back of the palate, which is where bitter tastes are picked up.

"The hops are added quite late in the boiling process, so you get beautiful citrus aromas and a smooth, velvety finish."

Ms Yarker, who divides her time between Dunedin and Clinton, planned to develop Beltane Goddess and Beltane Mistress beers.

"The three beers will celebrate women and the three aspects of a woman's life - as a maiden, the child-bearing years and as a wise, old woman, or crone," she said.

Beltane Maiden is made under licence by Harrington's Brewery in Christchurch.