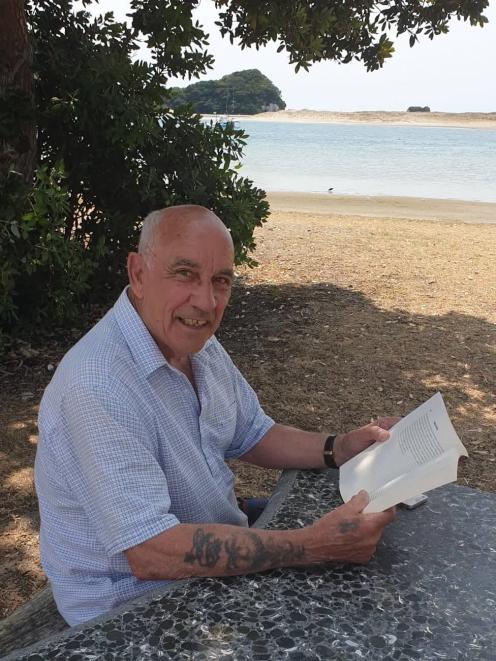 John Dennison relaxes at Mangawhai before his return to Dunedin soon to start organising this year’s Big Heart Appeal in Dunedin. PHOTO: SUPPLIED
This year’s Dunedin area co-ordinator for the Heart Foundation New Zealand’s annual street appeal John Dennison jokes that at almost 80 years old he might be getting to the age where he could benefit from the charity’s work.

There is no history of heart disease in his family, but he has been supporting the foundation for decades because he recognises that heart disease is still New Zealand’s biggest killer and that ongoing research into it is vital.

The foundation funds research and specialist training for cardiologists.

Heart disease still causes more than 6300 deaths a year in New Zealand, despite a considerable reduction in death from the disease since the inception of the Heart Foundation 52 years ago.

Although this time will be his first time as co-ordinator, Mr Dennison has been a street collector for the foundation for 20 years and a supporter for at least another decade.

Originally from Waimate, Mr Dennison had a navy career and was stationed in Auckland, but moved to Dunedin in his retirement.

He does not regard volunteering as a collector as a chore, getting pleasure out of meeting people.

‘‘Dunedin is the perfect place for collecting.’’

People living south of Wellington were ‘‘ a totally different breed’’. Everyone was friendly in the south, although ‘‘ we shouldn’t keep telling people that or they’ll want to come down here too’’.

The Heart Foundation needs 64 more volunteers in Dunedin for the appeal, to be held on Friday February 21 and Saturday February 22, but it is not expecting to have difficulty getting the required numbers.

Mr Dennison said there was usually a wide range of ages of people involved, with more in the lower age range.

Otago and Southland manager of volunteering for the Cancer Society Charlotte Molloy agreed that the ease with which charities can attract volunteers may be related to how well known they were.

The society, which has 1500 volunteers across Otago and Southland, did not have difficulty getting collectors for its annual appeal, which will be on August 28 this year.

The state of volunteering in the city was really healthy for one-off events such as the street appeal, particularly within the university and polytechnic population, Miss Molloy said.

Although many people no longer carry cash, organisations involved in street appeals are using technology to get around this.

For the first time this year, prospective donors to the Heart Foundation’s appeal will be able touse their phones to read QR codes to connect directly to the charity’s website and make a donation there.

Mr Dennison is expecting this will prove popular, since most people carry phones which could use the technology. Miss Molloy said the cancer society had a number of eftpos machines for its annual appeal and it also used social media to promote the various ways people could give.

‘‘ You would be amazed at how many people see someone collecting and go up to the bank and come back with cash or go to the supermarket and come out with a note. People are very generous to our organisation.’’

Mr Dennison said the age of the donor did not seem to affect their generosity. Students might be down to their ‘‘last 10c but still prepared to give it to you’’.

★ Anyone wanting to volunteer for the Big Heart appeal can visit heartfoundation.org.nz or phone the Heart Foundation on 0800 244 432.