They were the final words in Hannah’s email to director-general of health Dr Ashley Bloomfield, asking if he would be the guest speaker at her school’s Wellbeing Week this week.

Much to the 18-year-old Columba College pupil’s surprise, the busy health professional responded.

In the video, he sent his best wishes for the school’s Wellbeing Week.

"A big shout out to you all for the work you are doing to look after the wellbeing of students down at the college. 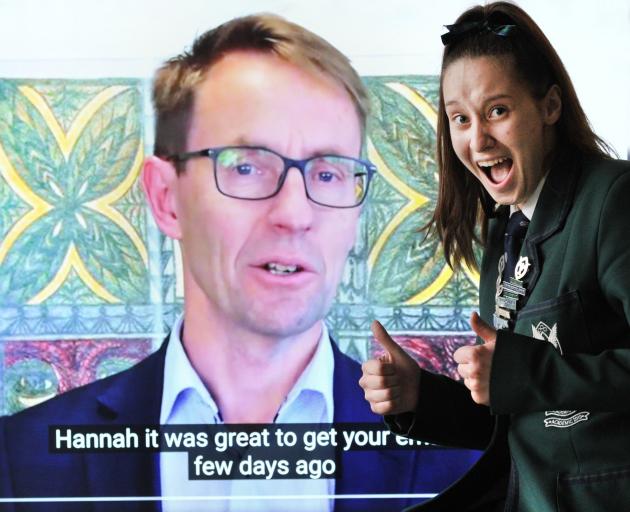 "It’s great timing because, of course, this week is Mental Health Awareness Week and we should all be thinking about what we need to do to make sure we are mentally well, and that we are looking after each other."

Hannah said the initial aim of her email was to see if Dr Bloomfield would share key messages about mental health with the school community.

But she and her fellow Wellbeing Week committee members were realistic and thought getting a response was a "long shot".

"I was definitely thinking we probably had the wrong email address, it probably won’t even go through him, and if he sees it, he’ll probably say no."

So when he responded, she was stunned.

"It was all just a bit unreal.

"I was definitely in shock because that’s Dr Bloomfield, whom we’ve all seen on TV.

"I definitely wasn’t expecting that."

She said Dr Bloomfield was the ideal celebrity to share the message because he was a doctor, and he battled moments of great self-doubt and anxiety.

"I thought all these girls here, we’ve all got different things that we’re struggling with, so I thought it would be quite nice to include someone who does actually know about these things and really could relate to the girls as well.

"We wanted someone from outside our school community to show that mental health is a wider issue within the country."