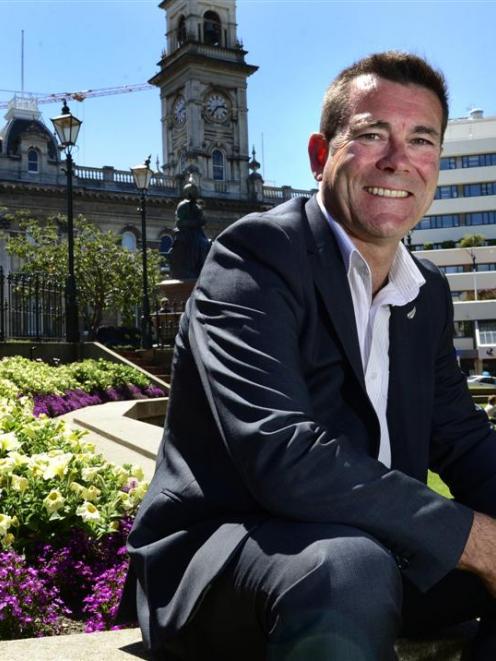 His daughter Emily (14) gave Mr Woodhouse a cobalt blue tie for Christmas, which he told her he would save and wear when he became a minister. While he was being interviewed by the Otago Daily Times, Emily phoned to congratulate her father, who promised to wear the tie on Thursday next week when he is sworn in by the Governor-General.

As chief whip, it was always expected Mr Woodhouse (47) would eventually become a minister but even he was surprised to take a call from Prime Minister John Key at 10.30am, telling him of his promotion.

''That is a huge call to take, obviously. I am hitting the ground running. After a busy year as chief whip, I was rested and recharged and ready to resume that role.

''It's been a fantastic four years and a privilege to serve Dunedin and others in New Zealand.''

Mr Woodhouse yesterday became the first National Party MP to become a minister while living in the city. Others who were born in Dunedin had gone on in other electorates in New Zealand, in the days of first-past-the-post, to subsequently become ministers.

There have been three previous National MPs in the city - the late Sir James Barnes served two terms from the snap 1951 election until 1957, the late Richard Walls served one term, 1975-78, and Katherine Rich was a list MP from 1999 until 2008.

Mr Woodhouse said Dunedin had been well served in the past by Labour Party Cabinet ministers. He felt it significant to join the ''club'' of ministers he admired - Pete Hodgson, Stan Rodger and Sir Michael Cullen - as a National Party MP.

Two years ago, Mr Woodhouse told the ODT his aspirations involved being appointed as a minister. Yesterday, he said no MP went into Parliament to make up the numbers on the backbenches. He had been helped by getting select committee appointments that reflected his interests. The skills he had learned as a chief executive of Mercy Hospital had been applied to his role as chief whip.

''My demographic is well represented - a middle-aged Pakeha New Zealander. I combined that with hard work, becoming regarded as a safe pair of hands and being confident in the House. I left the rest up to the leadership team.''

Mr Woodhouse was excited about the immigration portfolio because of its importance to business and the Government's growth agenda. Superimposing immigration on to the rebuilding of Christchurch created important policy issues to deal with, he said.

Veterans' affairs also had issues that needed to be dealt with immediately, such as the implementation of many of the Law Commission's recommendations to support veterans.

Planning for the 100th anniversary of the Gallipoli landing was also under way. It would be marked on Anzac Day, 2015.

Asked to comment on other changes in Cabinet, Mr Woodhouse said he was not surprised to see Simon Bridges promoted or that Amy Adams retained environment.

''I am delighted to see Nick Smith return. He is a mentor to me and we have worked closely together.''

He was also pleased he would be working with Nikki Kaye, who has become Food Safety Minister and also Associate Immigration Minister.

Ms Kaye, who joined Young Nationals in Dunedin at the behest of Mrs Rich, gained two degrees from the University of Otago.

Dunedin South MP Clare Curran congratulated Mr Woodhouse and said she had left a message asking for his help on an urgent immigration matter.

Ms Curran was scathing in December about the prospects of Mr Woodhouse becoming a minister, after the two clashed over the closure of the Hillside workshops.

''Good on him for getting the position. It's a credit to the work he has done in Wellington. But it won't stop me criticising his lack of attention to Dunedin issues. We do need more representation from a local list MP based in Dunedin and a commitment to the future of Dunedin. We don't see a lot of that,'' she said yesterday.