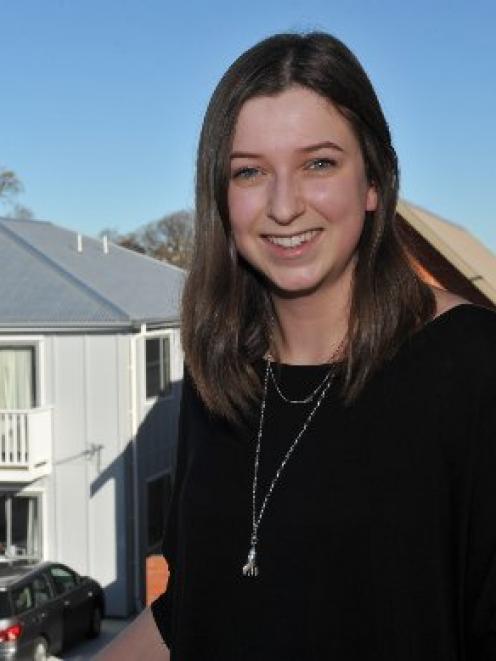 Tessa Saunders is a student who chooses to drink sparingly. PHOTO: GREGOR RICHARDSON
Will Gillespie did not come to Dunedin to party. He came to study health science at the University of Otago, and that was what he did with most of his free time, he said.

Mr Gillespie chose to live in one of 351 ''alcohol-free'' rooms in Otago halls of residence.

He went across to other buildings at Carrington to drink, but he did not drink often, and when he did, it was sparingly.

''I've never been drunk, so to speak, I've always just had a few drinks with friends and whatnot ... I've always liked being fully in control.''

He had gone out partying. He went to the Hyde St party, but he was sober, and felt a bit ''claustrophobic''.

She was a third-year student at Otago, and unlike Mr Gillespie, she lived in a flat. Ms Saunders did her fair share of partying in her first year, she said, but never enough to live up to the ''scarfie stereotype''.

Both she and Mr Gillespie were dismissive of the Sunday programme segment on TVNZ about Dunedin student party culture.

''There's this whole stereotype of this Dunedin, Otago scarfie, that's out of control, reckless, disrespectful drunkards, and it's so ridiculous because there are so many of us that aren't like that,'' Ms Saunders said.

Mr Gillespie has also felt the ''stigma and stereotype''.

''Whenever I go to any place in Christchurch or Wellington or Auckland and say that I'm a student from Dunedin, they ask me how many couches I've burnt,'' he said.

''It's really quite misleading, [and then I say] `No, I actually haven't been drinking this year at all, and then they kind of look at me strange as though I was different.

''But there are so many of us that it's kind of an unfair representation.''

Ms Saunders did not dispute that student party culture had its negative sides.

''I can't deny the idea that Dunedin is a bit of a party university, and people do want to come down here for a good time,'' she said.

Media coverage of student parties only made it worse, she said.

Student drinking culture was not a Dunedin-specific problem.

''It's more New Zealand's drinking culture that's out of control, and in Dunedin, it's just highlighted because we live in such a densely populated student area.''