A Dunedin father says more boy racers than ever are speeding past his Caversham home, doing burnouts and putting children's lives at risk. 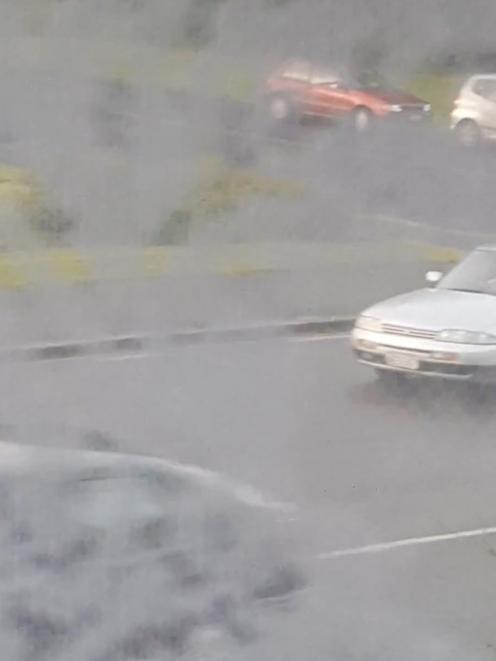 Boy racers in both lanes of South Rd, Caversham, in this still from a recent video by an angry resident. PHOTO: SUPPLIED

Speaking on condition of anonymity, the man called on police to step up patrols in the area, in response to the groups of boy racers he says have turned South Rd into a race-track.

"I believe there should be more drive-bys ... to let them know someone is watching.''

On Sunday evening, he filmed a group of young people milling about their cars in Caversham Pl about 8.30pm. He suspected they were arranging a street race.

Shortly afterwards, the two vehicles lined up in Caversham Pl, before speeding around the corner into South Rd screeching their tyres, as one of the cars travelled on the wrong side of the road.

The man said the level of boy racer activity was the highest he had seen while living in Caversham.

He feared their behaviour could end up injuring South Rd residents or damaging their properties.

"These cars are weapons. They need to be aware what they're doing is dangerous.''

Area road policing manager Senior Sergeant Jared Kirk, of Dunedin, said police were aware of similar issues in Green Island, but had not been made aware of the problems in Caversham.

He encouraged people to make complaints to police if they saw dangerous driving and said officers would try to attend all such incidents.

"Police will continue to do everything we can to keep an eye on boy-racer activities, especially where other road users are put at risk, so we encourage members of the public to call them in.''

The term 'boy racer' belies this ongoing issue, one that only gets worse as the decades pass. Most of these people display antisocial behaviours and are often borderline narcissists. They appear to be incapable of considering the consequences of their actions, many show little or no remorse at court trials when their actions have resulted in the death or serious injury of others - often their own friends.
They thumb their noses at fines and court ordered restrictions, racking up fines (sometimes in the tens of thousands).
Any adjustment in attitude toward this problem has to come from the wider society as it certainly won't be self administered by the immature tribe that is collectively known as 'boy racers' (with a few 'girl racers as well). The problem will not go away until public pressure becomes too great for politicians to ignore.

Start by taking 'Top Gear' off the TV.

If you think they get their inspiration from Top Gear, then you are WAY off.

i doubt they'd understand ANYTHING on Top Gear.

wheres out great government on this ........hiding from many things

Crush the cars, even if they don't own the car, if car yards and finance companies are still offering $1 down car finance stop it. Name and shame them and their families, Limit the types of cars young ones can purchase like Aussie

Park up somewhere on queens drive st Kilda...
All hours of the night, any day of the week.
You'll hear Muppets thrash is form the bp, full revs right through to hooking 4th, doing at LEAST 100 by that stage.
I've tried, but cops aren't interested as there are very limited police around at that hour or the night/morning.
Ps. Top gear has nothing to do with it. What an idiot comment to make.
It's vtec hondas and skylines, not Ferrari and Lamborghini supercars in Dunedin

All that reckless behaviour like this does is make it harder for car enthusiasts (the ones who don't do illegal stuff, set out to annoy people/litter/wreck property etc) to own cars of a similar type.

Not every Skyline, EVO, WRX, Honda etc owner is a hoon, a number of us enter legit motorsport events and generally don't keep racking up demerits/don't keep getting our cars impounded etc.

Sadly, this sort of thing has been going on since the very first cars came along in the 1900's and it will always continue that way. I'm not saying grin and bear it, by all means report illegal stuff to the police if you get the details of the car/video proof etc, but remember not to lump every owner of these cars into that same basket.

Top Gear concerns English boyish racers who like nothing more than tearing round the countryside (other peoples').

Old and young racers are preoccupied with cars and engines. This is a moral panic - no crime has been committed.