Builders' concerns over both delays and extra costs incurred as the Dunedin City Council struggles with a building consent backlog continue, despite what Dunedin Mayor Dave Cull says are the council's best efforts.

The council says it has reduced the number of late building consent applications by 22%.

But builders who say they have waited between 30 and 40 days, and found themselves unable to start planned work, have continued to contact the Otago Daily Times.

Their concerns follow an admission from the council earlier this month the time it took to process building consents was sometimes unacceptable.

Staff said a combination of a lack of resources, the unavailability of other consenting authorities to help because of Christchurch putting pressure on the system and a lack of staff was behind the problem.

Mustard Construction director David Bircham's consent was sent to Auckland firm Professional Building Consultants Ltd, which is helping the council with its overflow, after about 29 working days.

He said the processing was completed there eight days later.

From that point, it took 11 days for him to hear from the council it was completed.

Mr Bircham has also questioned the fee of more than $400 from the Auckland firm, and suggested consent applicants were being made to pay for the council's work to clear its backlog.

He contacted the council about what he calculated was the private firm's higher hourly rate.

He said that cost was ultimately passed on to clients, and he queried whether the council should be saddling applicants with the cost of dealing with its backlog.

The council later agreed to refund $161.

In an email, a staff member said he had taken a closer look at the work done by the Auckland company, and did not think a council processor would have taken the two and a-half hours to process the consent the company had taken.

Mr Bircham said he was not keen to go public on the issue, but was doing so for his clients' benefit, not as a personal crusade against the council.

''I feel very strongly that my clients get the service they deserve, as they pay enough for it.''

''The reason we send consent applications out to contractors is to try and ensure a consistent flow of appraisals at a time when there is enormous pressure on the consenting process created by the volume of work as a result of the Christchurch rebuild.''

Staff ''had some sympathy for the applicant'', and had offered to deduct an hour from the invoice as ''a goodwill gesture''.

The number of applications that had taken more than 20 days had fallen recently from 108 to 81, down 22%.

''We acknowledge that it is still taking too long to process applications and we are currently in negotiations with other councils that may be able to assist,'' Ms Pinfold said.

The council had not been able to fill a vacant staff position. ''We do know that recruiting building officers is a nationwide problem,'' she said.

Mr Cull said he and council staff were doing ''everything we can''.

When staff had looked for help from other councils, they had discovered waiting times in other centres were longer than in Dunedin, Mr Cull said.

That was ''no consolation'' for people caught up in the delay, but the issue was not just a Dunedin problem.

''I've encouraged them [staff] to pull out all the stops.'' 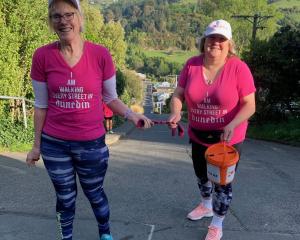