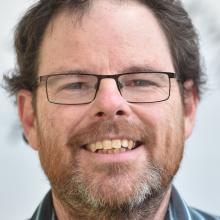 Alex King.
A Dunedin bus users’ support group is backing a proposed central bus hub but urges a "radical reduction" in its size and better protection against wet weather.

The support group, also known as Bus Go Dunedin, has made one of about 200 or more public  submissions  to the Otago Regional Council on the proposed hub, by the December 24 deadline.

The ORC has suggested a bus hub design involving five bus stops on either side of a Great King St block near the central police station.

In its submission, Bus Go suggests a "half hub" of about three stops on either side would be "half the price", "twice as good for users", and therefore "four times the value for ratepayers".

As bus advocates, they gained "no satisfaction" from non-bus-users and retailers "getting a rough deal", and a smaller hub would mean less disruption of businesses in the street.

The hub could be reduced in size, to about six stops, simply by making sure buses arrived there just in time to depart. This could be achieved by "briefly holding" buses at other bus stops throughout the city centre.

ORC support services manager Gerard Collings said the ORC offices were closed until January 4, and a final tally of community submissions on the hub was not yet complete.

He understood it could be virtually impossible, on technical grounds, to almost halve the number of bus stops at the hub.  Some other submissions had also suggested, as had Bus Go, adopting a distinctive name for the hub, and all submissions would be fully considered by ORC councillors next year, he said yesterday.

Mr King said the money saved could allow the remaining hub to be "built to a higher standard, with better shelter from weather".

Savings could also be used to improve the services generally, including by reinstating recently reduced services to Belleknowes, which had been halved during off-peak weekdays. Under the current 10-stop hub proposal, the bus stops at either end of the hub would be "as far apart" as  "some present bus stops on George St".

That would be "an unreasonably long distance for people to walk when changing buses", he said.

The support group praised other aspects of the hub’s design, particularly "accessibility for disabled users and the use of bold colours", and the use of a raised kerb to make it easier to enter and alight from buses.

The lack of protection from rain between George St and the hub, as proposed, represented a "downgrade of facilities, as all current principal bus stops in the city centre are linked from George St by uninterrupted veranda cover apart from street crossings". George St should be linked to the hub by "uninterrupted rain protection", he said.