Businesses fear being driven out of area 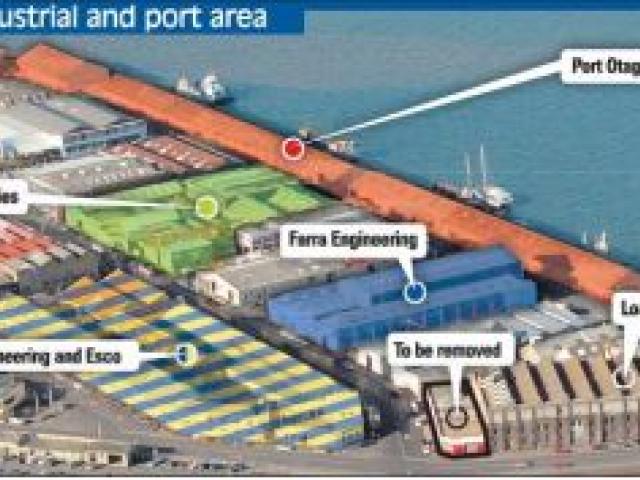 The district plan had already made the choice for them, lawyer Phil Page also said, because it said there could not be incompatible activities in the same area.

Previous councillor panels had held fast to the plan's underlying principles of separating activities, he said, first in withdrawing most of the proposed harbourside zone and then in declining consent for a $100 million waterfront hotel in Wharf St because it was a non-industrial activity in an industrial zone.

Mr Page was representing Kaan's Catering Supplies, Farra Engineering and the Otago Chamber of Commerce, who all oppose an application from Russell Lund to redevelop the empty building, which he believes has no other viable economic use, into 24 apartments.

His clients agreed it was good to save heritage buildings, Mr Page said, but the fact the Loan and Mercantile building was listed was not something the panel of Crs Andrew Noone, David Benson-Pope and Lee Vandervis could consider, as the district plan did not treat heritage status as an exemption from policy to separate incompatible activities.

''There is a major policy confrontation at play here. On the one hand there is value in the restoration and reuse of heritage buildings. On the other hand, there is the undoubted value in vibrant and efficient industrial heart of the city that is a major employer ...''

The three opponents were members of the ''tight five'' that lobbied successfully against the proposed harbourside zone in the late-2000s, over the same concerns industry now has about Mr Lund's proposal.

The companies and the chamber, which chief executive John Christie said was representing the interests of companies in the area that did not want to be named (but he later conceded he was not acting on the resolution of the entire chamber), join steel foundry operator Esco in opposing the project because they believe opening the door to residential activity in the area would, ultimately, squeeze them out.

The issues they envisage include complaints about noise and smells, issues with parking and traffic, precedent (there are 17 listed heritage buildings in the area) and gradual increases in rents and land values.

The relocation of industrial businesses was a documented expected result of the harbourside zone proposal, they noted.

Although Mr Lund has agreed to noise mitigation measures including a no-noise covenant for the apartments, which appeases another neighbour, Port Otago, the companies say they do not think a covenant would work in practice because complaints would continue despite it, they would feel morally obliged to respond, it would not stop visitors complaining and residents could still oppose future applications for consent to expand or change emissions levels etc.

That would change their work environment, eventually making it unworkable.

Mr Christie said the proposal was exactly what the chamber fought in the harbourside proposal. It supported the waterfront hotel proposal because businesses had less issue with it and it was a short-stay endeavour, he said.

''In cities all over the world, we have watched our colleagues get squeezed out by the trendy downtown apartment set, either by their spending power (rent competition) or through direct conflict. One rational strategy for managing that risk is to move. After 150 years in Dunedin, we don't want to do that.''

Kaan's owner Lindsay Kaan said a consented flat beside his business was ''disastrous''. There was continual conflict with tenants over the company's ''antisocial'' behaviour (it operated 24-7), parking, noise and people climbing on the business' roof.

''In the day-to-day battle of trying to get along with these people, I doubt nice legal agreements about who can complain about what would really make any difference.

''Although I could live with just this one, I have got to draw a line in the sand, or my place will be next.

''That is what the [harbourside proposal] appeals were all about and why we fought so hard. We let the south side of the basin go to save the north side. Do we have to have that fight again?''The hearing will be reconvened at a later date, when council planners will respond to submissions and Mr Lund will have right of reply.