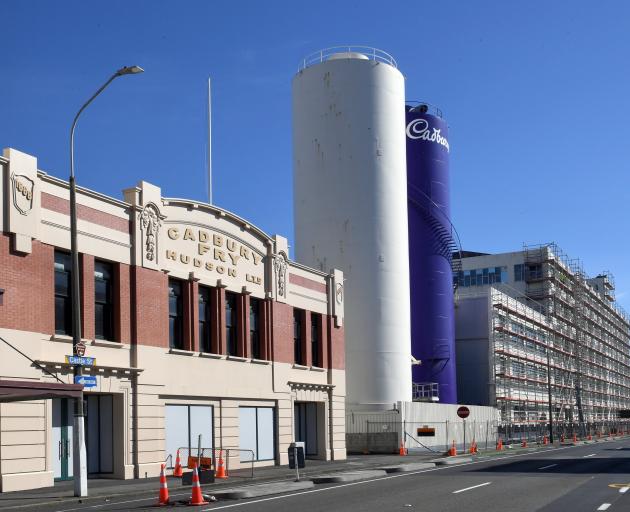 The Cadbury dairy building (left) will remain when the new Dunedin Hospital is built at the site, but it is not in good condition. PHOTO: STEPHEN JAQUIERY
A building with heritage value that has to be retained at the site of Dunedin’s new hospital development may need significant structural improvements to be used for any purpose.

The Ministry of Health says the Cadbury dairy and machine house building is in a poor state of repair.

It is assumed to be earthquake-prone, probably meeting less than 34% of the new building standard.

Getting the building up to 67% of the standard could require significant structural improvements.

However, a ministry spokesman said the building was not viewed as being required for the hospital development and a full condition assessment had not yet been undertaken.

Retaining the building was a requirement that was part of the demolition consent at the former Cadbury factory site, which is where the hospital inpatients building is to be constructed.

In its application for demolition consent last year, the ministry said the dairy building could be "adaptively reused" for non-clinical purposes.

The building had low architectural merit, but its footprint and facade represented changing functions since it was constructed in 1868 as a saw mill, then a cellar in 1875.

The building had retained its Victorian industrial form.

Its reconstructed facade reflects its adaptation in the early 20th century as part of Hudson’s confectionery factory.

The application for demolition consent said the building would be maintained and "actively utilised as part of the new hospital, bringing new life into not only the building but the entire site".