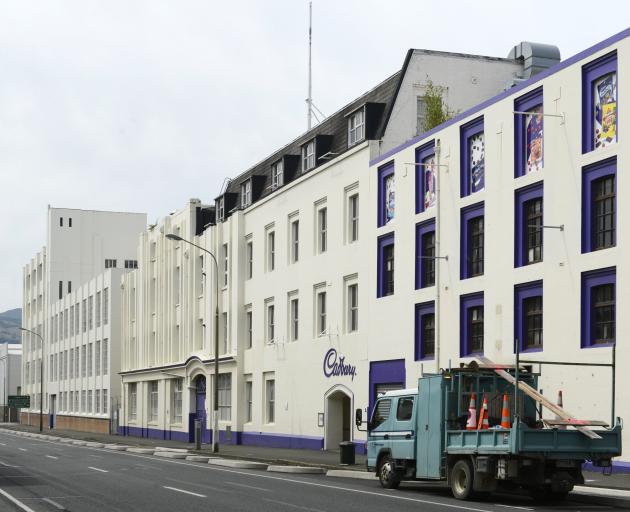 The old Cadbury building is to be demolished. Photo: Gerard O'Brien
Traffic flow on Dunedin's one-way system is expected to suffer when demolition work starts on the former Cadbury building to make way for the new Dunedin Hospital.

A video released by the senior project manager for the work, Blair Collie, says managing the flow is expected to be "very difficult" when demolition starts next year on a building with plenty of contamination issues, including asbestos.

The work may exacerbate traffic issues that have frustrated some drivers in the city.

But the project appears to have no shortage of competition among contractors keen to do the work, with more than 20 companies interested.

That number has pleased Southern Partnership Group chairman Pete Hodgson, who described the response as "great".

Mr Collie said on the video contractors "from all over New Zealand" were being shown through the building.

The purpose was to show what was required on the "complex" site.

"They're going to need to know what they're in for."

One issue with the work was it was on a challenging site, with major one-way streets on either side, both of which are state highways and important arterial routes for the city.

"It will be very difficult to manage traffic flow during the demolition phase," Mr Collie said.

The work would take time.

Contractors would not be "taking a big sledge hammer and smashing into the side of the buildings"; rather they would dismantle them considerably more carefully.

They would be working inside for a period before they were seen by the public.

There were plenty of contamination issues, including asbestos, that would dealt with behind closed doors first, meaning it would be six to 12 months before the main structure was taken down.

Mr Hodgson said he would be surprised if the work took 12 months.

"I suppose what they're saying is don't expect to see anything soon."

There had been no suggestion demolition would take longer than had been scheduled.

Mr Collie said there was still heavy plant left on the site that had been used by Cadbury.

"The contractors are really going to need to take that into consideration."