Call for 'conversation' about cats 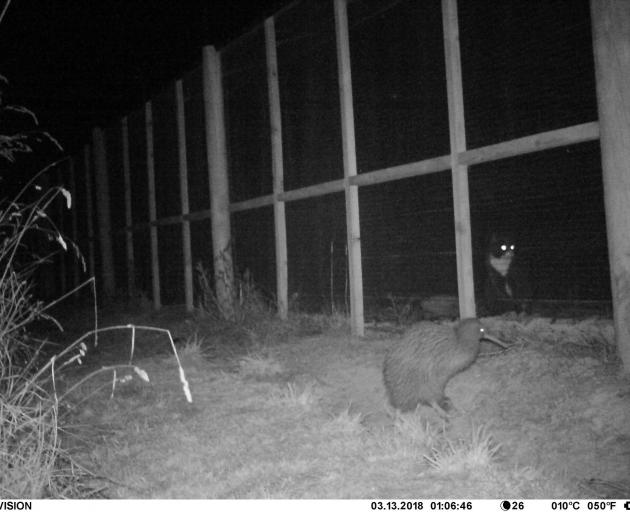 A cat stalks a kiwi along the fence of Orokonui Ecosanctuary. PHOTO: OROKONUI ECOSANCTUARY
Orokonui Ecosanctuary's conservation manager is pleading for cat microchipping and a "public conversation" about the animals after a photo at the sanctuary showing a cat metres away from a kiwi, separated only by a fence.

Conservation manager Elton Smith said he wanted to "start a conversation" around the contentious issue.

"We've had a massive response."

The picture was taken in March on a camera placed by a researcher.

The cat would not be able to get into the sanctuary, he said.

"Cats are one of the few introduced predators that haven't been able to get inside.

"The fence is very cat-proof, but that's not the point."

The problem was cats killing animals which could get out of the sanctuary, including robins, kaka and lizards, he said.

"We've even had tuatara escape."

The sanctuary was "absolutely not" planning to trap cats.

`We couldn't kill them because clearly we would kill domestic cats.

"We could live-trap cats, but still we really couldn't tell the difference.

"It's too resource-demanding and too politically charged."

He would "absolutely" support the compulsory microchipping of cats in Dunedin, he said.

"I, as a wildlife manager, could then do something about our feral cats."

Cats were seen "all the time" roaming the outskirts of the sanctuary, he said.

"There must be some middle ground between that and not having a cat walking around a nature reserve at night, which is the highest protection there is for conservation land."

Department of Conservation threatened species ambassador Nicola Toki said she was "really keen" for New Zealand to have a conversation about cats.

"We have the highest cat ownership rates in the world and we have a massive problem with feral cats.

"We have to talk about cats in the wild and people not fixing their cat and dumping them and all that sort of stuff."

The Dunedin City Council does not have any bylaws requiring cats to be microchipped.

However, it led the charge for Local Government New Zealand lobbying the government for regulatory powers including identification methods such as collars and microchipping, de-sexing and responsible cat ownership.