Call for end to 'stalling' on Te Rauone 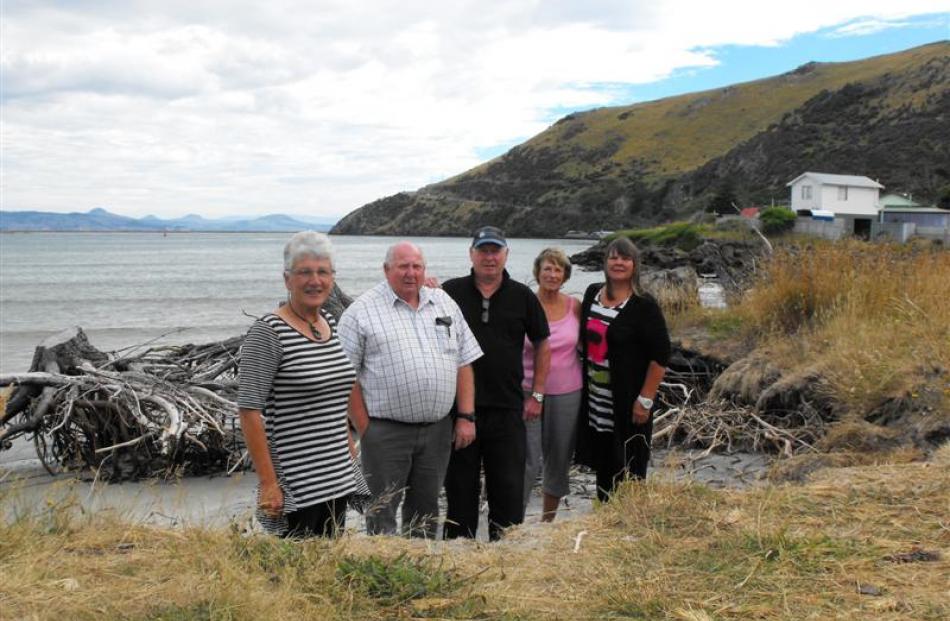 Te Rauone residents (from left) Edna Stevenson, Jim Shanks, Graeme McLean, Bev Russell and Jan McLean are fed up with the lack of action over erosion. Photo by Eileen Goodwin.

A delegation of disgruntled Te Rauone residents attended the Otago Peninsula Community Board meeting yesterday with a message for the Dunedin City Council - stop the procrastination and blame around fixing coastal erosion.

Flanked by about a dozen fellow residents, Edna Stevenson said despite a provisional funding promise, the council appeared to be continuing a pattern of stalling, and blaming residents.

''This week's [newspaper] reports on funding for the breakwater has yet again created stress and concerns for not only the affected residents, but the wider community, who are powerless to save a valued recreation asset owned by all Dunedin citizens.

''It is more concerning when further up the harbour, council has funded and continues to pay the maintenance for man-made beaches, yet finds every excuse under the sun not to commit to saving a natural beach.''

Using the argument of rising sea levels as a reason to do nothing was merely an excuse for inaction, she said.

While she was encouraged by the council's conditional promise of $50,000 towards the $180,000 project to create a rock groyne to protect the reserve, and several private properties, there remained much uncertainty. The money is conditional on several factors, including a review of the design of the breakwater.

In contrast, Mrs Stevenson said, Port Otago had accepted some responsibility, and was contributing to a solution, as were residents, she said, who were taking a share of the responsibility and costs.

''The affected residents are happy to maintain their own frontages, and are willing to form a partnership with council to achieve a desirable outcome for all.''

Lack of communication was a major problem. Residents were frustrated, but not, despite reports to the contrary, divided over the issue. It was more a case of ''Chinese whispers'' leading to confusion, Mrs Stevenson said.

Resident Janine Karetai said the council must stop conflating the erosion with the ''incomprehensible'' problem of climate change, and instead work on a solution on the ''micro-level''.

Chairman John Bellamy said the community board had made the extent of the problem very clear to the council, and he was not sure what else it could do.

After the meeting, resident Graeme McLean told the Otago Daily Times the council's conditional $50,000 offer was ''miserable''. Residents say that if the old harbour board groynes had been maintained years ago, erosion would have been halted.

Residents estimate that over the past 60 years or so, about 150m had been lost from the worst-affected spot. Resident Jim Shanks - whose own property is unaffected - said some residents had been blamed for worsening the erosion with measures they had taken to protect their properties, but they had been given little choice but to try to do something.