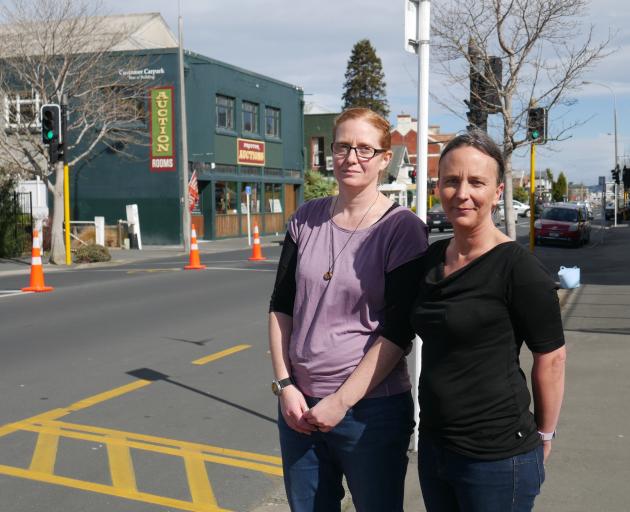 Parents Kimberly Smith and Tania Henwood want the crossing outside George Street Nor­mal School to be made more visible. Photo: Jessica Wilson
Dunedin parents are calling on the Dunedin City Council to take urgent action to improve the visibility of a pedestrian crossing after a child was hit by a car.

But the council says a plan is in place to install temporary measures later this year or early next year.

Tania Henwood and Kimberly Smith want the light-controlled crossing outside George Street Normal School to be raised and painted so it is more obvious to drivers.

They were in contact with the council and understood the school was part of its school speed management project, but wanted something done in the meantime.

Mrs Henwood said the council project was an ‘‘awesome step in the right direction but we would like more’’.

‘‘We want to make the road safer for everybody.’’

Ms Smith said the location of the crossing was unique as it was not part of an intersection but was close to the nearest intersection on the corner of George and Warrender Sts.

There was nothing at eye-level warning drivers about the crossing, she said.

‘‘Drivers are not expecting a crossing so soon.’’

Last month, her son, Samuel (then 10), was hit by a car when the driver failed to notice the red light.

Samuel was ‘‘propelled a fair way up the street’’ and knocked unconscious.

While he was ‘‘OK’’ now, it motivated Ms Smith and Mrs Henwood to take action. They have since started a petition to support the idea of improving the road safety which they will present to the council.

They wanted to hear from anyone who had stories about accidents or near-misses, and encouraged people to also report them to the police and council.

They praised the school and Saturday Morning Music Classes staff for ‘‘doing what they can’’ to make it safer. The vigilance shown by teachers was why there had not been more accidents, Ms Smith said.

‘‘I think there are a number of initiatives that the council has suggested that we’re open to, and some of them are going to happen quite quickly.

‘‘Things are moving along and I’m happy with what they’re proposing.’’

Variable speed signs and new red pavement markings at the crossing outside the school would be installed later this year, or early next year, using temporary plastic bollards and kerb blocks. he said.

‘‘At a later date these temporary measures will be made permanent. ‘‘In the meantime additional traffic lights will be installed to improve visibility for approaching motorists.’’

If you put a sleeping policeman here, you may as well put them all along the main street and all along the one ways.
A better way would be to teach the children road safety.

Like, adult road safety? Child development is varied. Motorists should watch out for them.

They already do, teaching children includes things like not to run out between parked cars.