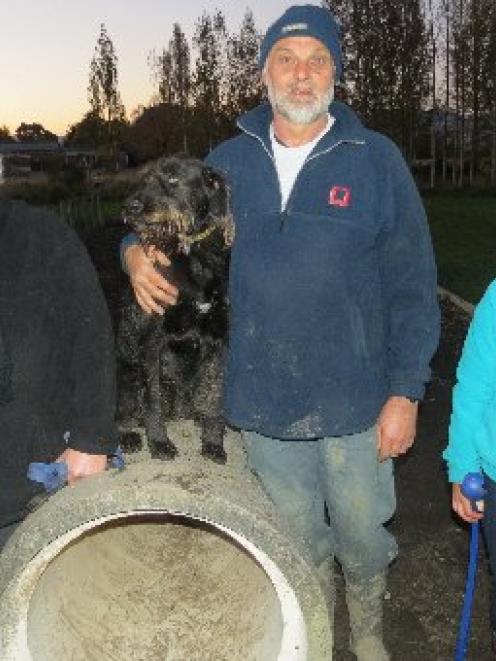 Friends of the East Taieri Dog Park members (from left) Glen Munn, Chris Burrows and Joy Hawley, with dog Tor, say improvements are urgently needed for the dog park. Photo by Jonathan Chilton-Towle.
East Taieri Dog Park (ETDP) users are calling on the Dunedin City Council to improve the state of the park.

Friends of the ETDP member Chris Burrows said the park was extensively used by local dog owners and by dog owners from further afield.

A petition with 112 signatures supporting an upgrade to the park had been collected.

These were presented to the council along with a submission asking for an upgrade to the park.

The ETDP was established on land with poor natural drainage and was bisected by a narrow watercourse flowing into and out of neighbouring farmland.

Lack of effective drainage meant the land was often wet and slippery. Patrons, especially the elderly, were at risk of slipping and there had already been some instances of people falling down, he said.

There was also concern a child might fall into a bog and drown.

The boggy waterways were a great attraction to dogs and the dogs came out covered in a thick sludge which was known to cause sickness, he said.

The other main issue was a total lack of lighting in the park.

Many patrons could only use the park outside business hours which, for much of the year, meant going there in the dark. This created a safety and security issue, especially for women, Mr Burrows said.

Other issues raised included establishing a shelter for bad weather, controlling a significant gorse problem on the northern boundary fence, and topping the barley grass to ensure it did not reseed.

According to the submission, barley grass was one of the worst things to be found in an area where dogs exercised. It could bore into their bodies and cause fatal injuries if left untreated.

''The dog park provides really valuable social opportunities for both dogs and people. lt brings people together because of a common interest and enriches the experience of dog ownership because it is shared.

"lt provides a communal context for some people who might not otherwise have one. So in this sense as a public amenity it punches well above its weight,'' the submission said.

Park users made a submission asking for an upgrade last year, but this had been turned down due to a lack of funds.