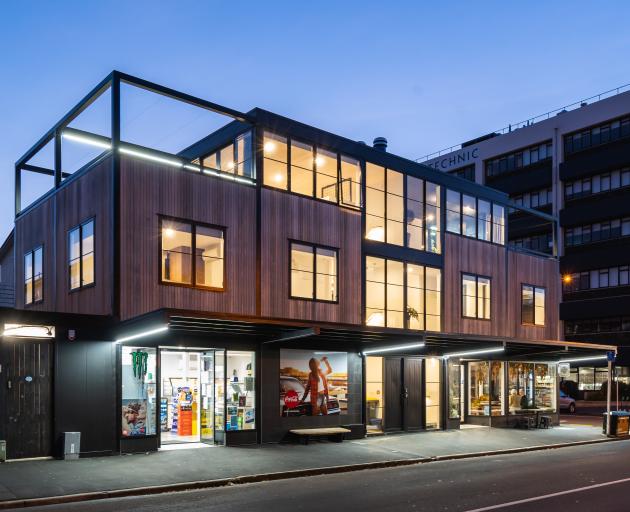 Gary Todd, of Gary Todd Architecture Ltd, was announced as the winner of the 2019 Commercial/Industrial Architectural Design Award at a gala dinner in Queenstown last night, for the "Campus Wonderful Dairy and Fluid Cafe".

It was one of just 10 projects recognised nationally.

The outdoor area of an apartment in the building.
Mr Watts said the project should be held up as an example of what was possible in the mixed-use space.

"How exciting to see a project that could have been uninspiring go in the opposite direction.

"Gary Todd has been innovative, creative and, most importantly, considerate to the community and the desires of the client."

The original single-storey building was a combined dairy and cafe on the corner of Forth and Union Sts.

It had no service court or licence for pavement use, had limited operational hours, was dated and needed to be replaced.

Mr Todd's brief was to design and develop the potential of the site to maximise the return on investment with a new building, including a cafe, dairy and apartments, that reflected a combination of commercial, industrial and residential use and character.

The cafe interior.
The new mixed-use building incorporated four separate individual rental tenancies to generate income and gave the client the option to sell two residential apartments, above the cafe and dairy, individually in the future.

Judges were excited about the design, commenting the rigorous steel grid framed a "lively mix of uses" on a Dunedin street corner.

"It elevates daily living and exemplifies a much-needed urban typology.

"The designer has done a superb job and taken their client on a journey that exceeds standards.

"It demonstrates sustainability and living sustainably in an urban environment, including family living on the top floors," they said.

The annual awards celebrate the most innovative and creative architectural designs in the country, identifying standout new homes, interiors, alterations and additions and commercial spaces.

The 2019 supreme award went to a small two-bedroom family home in Gisborne.

The house is a series of cedar boxes sitting on a deck that floats over its rural site.

An exposed timber roof structure hovers over the cedar forms, creating a light, feathered shelter for the home and its outdoor spaces.

Did it get a prize for box of the year as well.