Institution’s leader not one to give up easily

As the polytechnic sector faces a major overhaul, it is relevant to note Otago Polytechnic chief executive Phil Ker used to run marathons, writes Shane Gilchrist.
Phil Ker, the man at the helm of Otago Polytechnic for the past 17 years, used to like building things as a young boy.

He still does. He's working on a 10sqm sleepout, a relatively small foil to all the other big projects in which the institution's chief executive is involved.

This includes Te Pa Tauira, Otago Polytechnic's $20million-plus student village in Dunedin's Harbour Tce where, for a while at least, passers-by shuddered to the sound of a digger's teeth scraping concrete as construction work was completed.

There have been more than a few noises emanating from New Zealand's institutes of technology and polytechnics in recent weeks, too, following Education Minister Chris Hipkins' February 13 announcement of a major overhaul.

Thus Mr Ker, like others, finds himself in rebuilding mode.

Faced with a Government blueprint that (and he's the first to admit this) had him rocking on his heels when it was first tabled, Mr Ker is now a blur of activity, sleeves metaphorically rolled up as he charts a path that welcomes aspects of Mr Hipkins' plans, yet offers solutions that are potentially more regionally responsive and, therefore, more nationally palatable.

At this point, it's relevant to note Mr Ker also used to run marathons. That was until the 67-year-old had a knee replacement several years ago. Regardless, his tenure at Otago Polytechnic provides proof of an ability to stay the course.

A quick history lesson: in 2004, when Mr Ker moved from Auckland to take up the role of chief executive at Otago Polytechnic, the institution was technically insolvent; a major building project had gone awry; and it was still reeling from a central government review, known as the "dreaded BRP" (business recovery programme), the previous year. 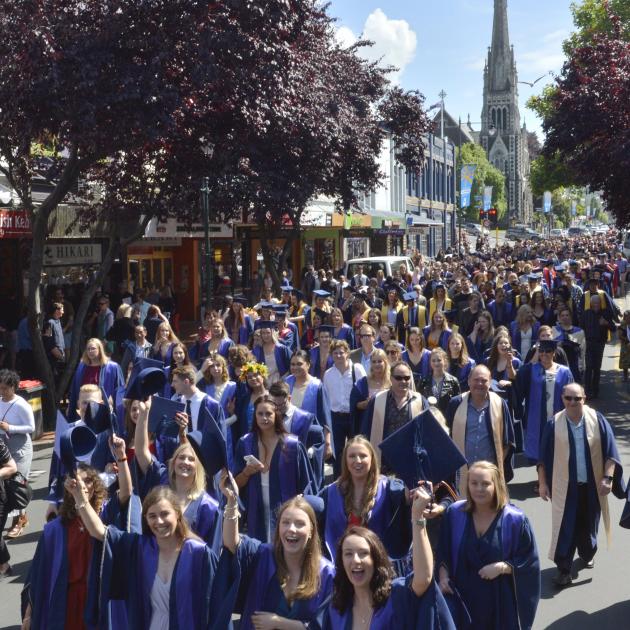 Otago Polytechnic graduands march along George St to their graduation last year. PHOTO: GERARD O’BRIEN
In fact, about a fortnight after being offered the Otago Polytechnic job, Mr Ker received a call from a careers recruiter. Another position was tabled, "for one of the highest performing polytechnics in the country at the time".

Mr Ker declined. He was more interested in the challenge, of "taking something that was broken and working on it".

"When I arrived the budget was for a very small surplus. However, there was an overdependence on low-level community computing programmes - about 20% of all enrolments - and these had no student fee attached, so were not that successful financially."

Hard calls have had to be made. A shake-up of senior management in 2016 involved replacing a 12-member leadership team with a smaller group, which now comprises Mr Ker and five deputy chief executives, three of whom were recruited externally.

"We had done really good things, but ... I felt that was a team for an era; it had both a strategy and operational focus and it did get Otago Polytechnic out of the ditch, so to speak."

Fast forward: Te Pa Tauira, the all-wood accommodation complex that rises above the hockey turfs at Logan Park, was completed in early 2018 and is part of an ongoing series of Otago Polytechnic construction projects.

These include the Hub, the institution's vibrant centrepiece, completed in 2016; and a $50million-plus "campus development plan" involving constructing two or three significant buildings and upgrading existing buildings over the next several years.

According to its latest economic impact report, the institution contributed more than $425million to the economy in 2017.

Much of this has to do with Otago Polytechnic's flexibility and responsiveness to student and industry demands, allied to a fiscal robustness that has enabled it to remain in the black, regardless of underfunding from previous government tenures.

A recent report by the Tertiary Education Commission found Otago Polytechnic had the highest percentage (87%) of students successfully completing qualifications, of all New Zealand's other ITPs.

Increasing the number and depth of higher-level programmes has helped, Mr Ker says.

Building on traditional strengths such as trades training, nursing, midwifery, occupational therapy and business courses, the institution has added to its suite of higher-level programmes.

"I attribute much of our success to our ability to innovate at all levels and across all endeavours - in programmes and service provision as well as whole new `products' such as EduBits, our suite of micro-credentials.

"And our success also springs from our provision of education for adults in the workplace, through Capable NZ, a national-leading and world-class service of which I am immensely proud."

All of the above reveals the relationships Otago Polytechnic has with its community, but also illustrates how those roots stretch across the world. And how those connections flow back.

The benefits of its international initiatives go beyond the fiscal, however.

Chinese students complete three years of the four-year degree in China, and Otago lecturers travel there for up to six weeks at a time to deliver part of the programme.

The students then travel to Dunedin to articulate to the bachelor of engineering technology (mechanical) for their final year at Otago Polytechnic.

"Internationalisation is also about Kiwi students studying abroad and this is growing steadily through our partnerships in China, Japan, the United States and Canada."

"But my job is to introduce changes. And that's not just in the context of the Government restructuring proposals.

"To serve our learners' needs, we have to read the signs, change and be innovative, not only in our programme delivery but our teaching approach.

"We are a stronger organisation now. We have to continue to offer top services, top programmes, top facilities. We have to be attractive.

"I passionately believe that my job is to be a good steward of Otago Polytechnic.

"And being a good steward means doing my utmost to try and influence the new order - to ensure the things which Otago Polytechnic has been able to do for Otago can continue in this region as well as be replicated elsewhere for the good of New Zealand and all learners."