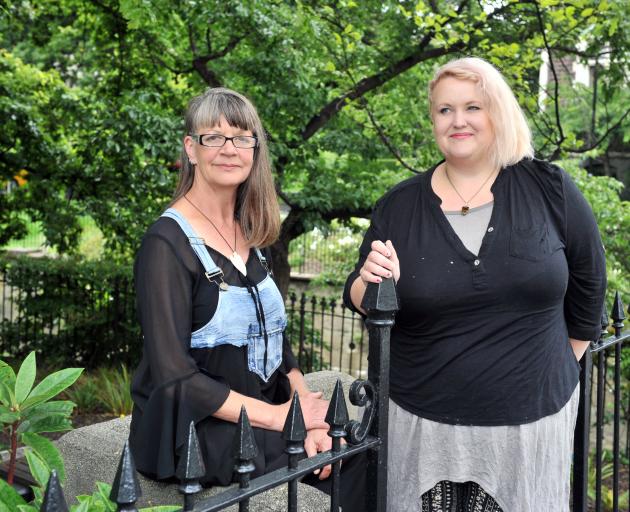 University of Otago ‘‘pagan chaplain’’ Tracey Crampton Smith (left) with post-graduate student Athena McMillan earlier this week. Photo: Christine O'Connor
From wiccans and druids to homesick students just wanting a bit of guidance, the University of Otago’s pagan contacts aim to bring a little bit of healing magic to everyone.

"Pagan chaplain" Dunedin celebrant Tracey Crampton Smith, who is getting ready to welcome back students next semester, said she had been providing spiritual guidance on a voluntary basis at the university for the last three years. Although not officially listed as a chaplain, Ms Crampton Smith shared facilities with the university’s Christian chaplaincy team and appears on the university website as a spiritual contact, along with members of the Muslim and Jewish communities.

Ms Crampton Smith said she hoped the university would soon be able to provide a bigger shared space for spiritual advisers to talk to students wanting help. She saw between 15 and 20 students every year. She declined to put a number on how many practising "pagan" students there were, but said a lot of people might have pagan beliefs without really realising it.

Lack of parental guidance was something students away from home for the first time struggled with, and often the people who sought her advice did not necessarily have pagan beliefs, but they wanted some motherly advice from a non-Christian helper.

Ms Crampton Smith said her area of interest was the divine feminine, with emphasis on living with the seasons. Helping people carry out personal rituals and consecration — making something sacred— was one of the areas students sought her advice with.

Everyone had suffered some form of trauma in their lives, so she always started from a vantage of healing when she dealt with people.

"The universe can speak to you through nature," she said.

In previous years, she had provided support to students in the form of food parcels and blankets.

This year Ms Crampton Smith had help from postgraduate bioethics and health law student Athena MacMillan, who had set up her own Facebook community — called  "Kiwi Witch" — which enabled those with pagan beliefs to communicate. Ms Crampton Smith said she was more comfortable dealing face-to-face with people, whereas Ms MacMillan was a whizz with technology. Ms MacMillan said she tried to offer people "a sense of empowerment" and a way to express their "own personal voice".