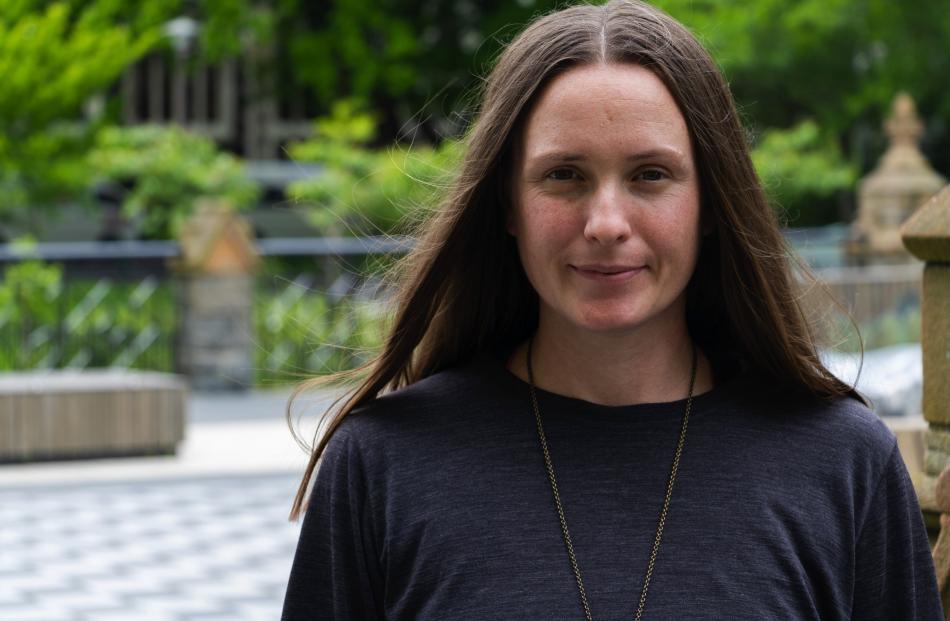 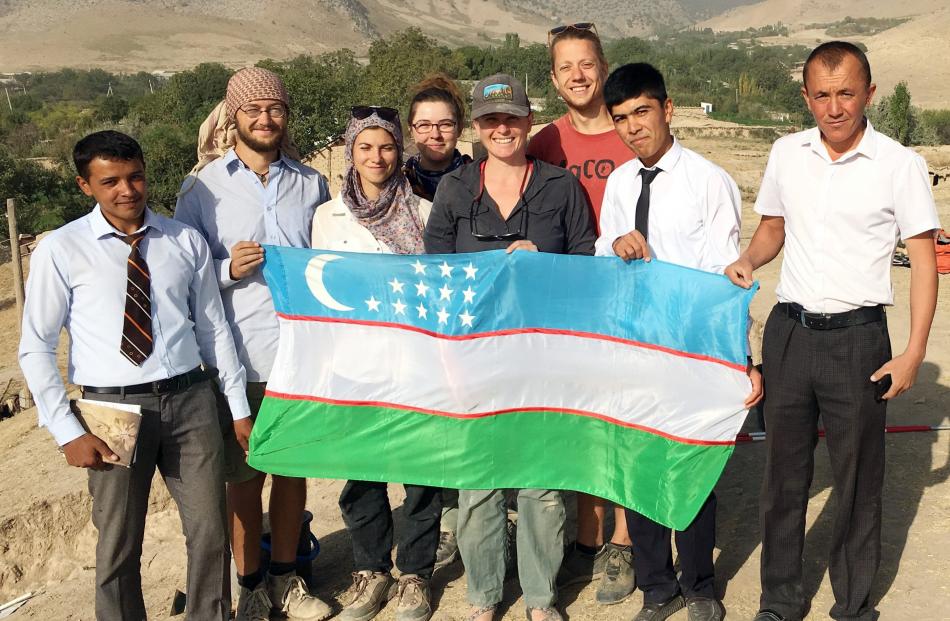 Local school teachers pose with the academics who worked on the site, and an Uzbek flag. 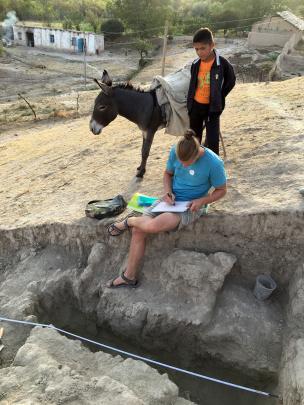 Academic Ladislav Damasek from Charles University in Prague records the archaeological site on Lungi Tepa, watched by a local boy. 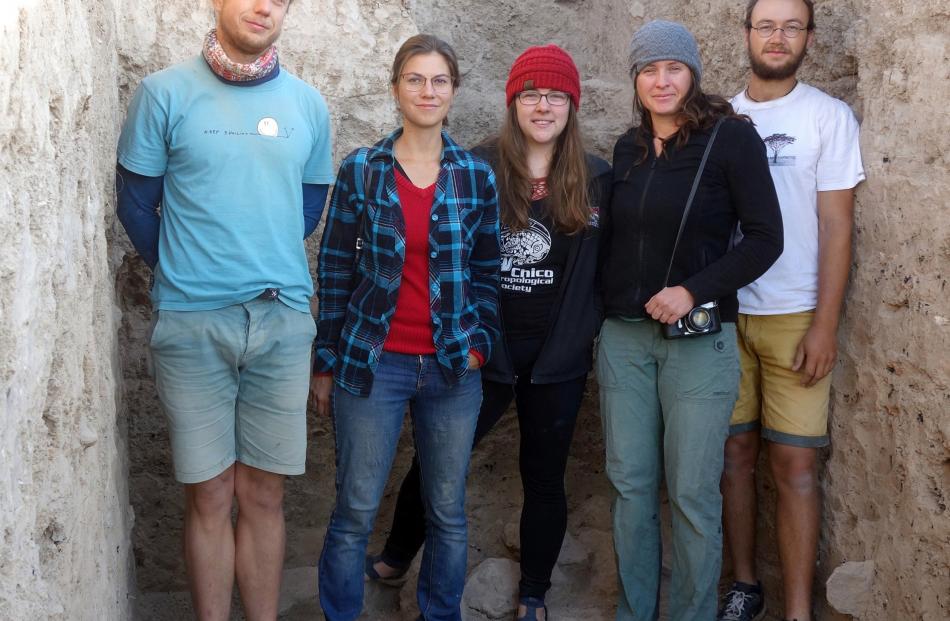 The team of academics who worked on the site are (from left) Ladislav Damasek, Marketa Smolkova, Robyn Kramer, Dr Rebecca Kinaston and Daniel Pilar. 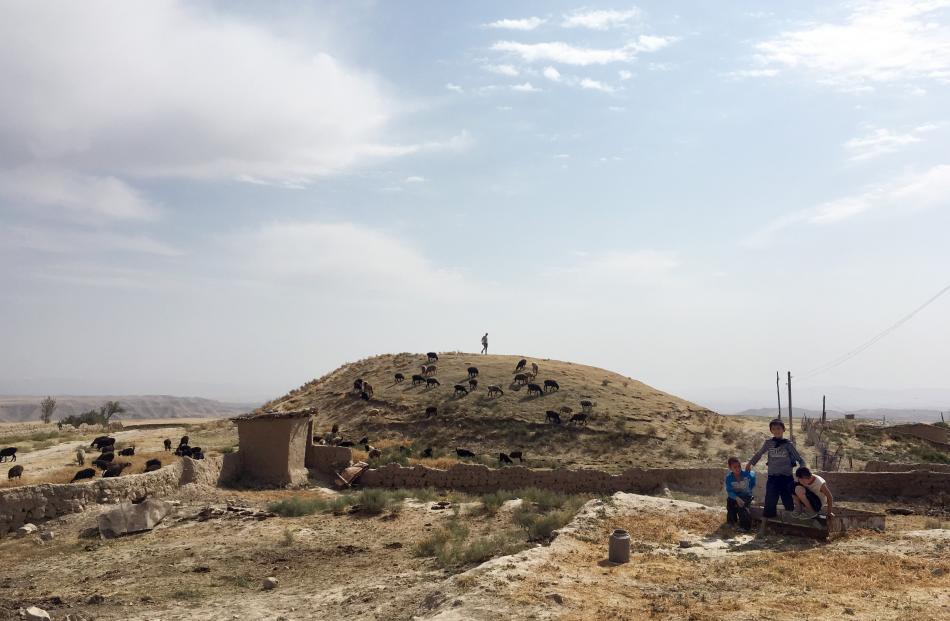 A photograph from the site of the excavation of a medieval cemetery in Uzbekistan.

The excavation of a 1000-year-old Uzbek burial site, and analysis of the skeletons contained there, has given University of Otago researchers a glimpse into medieval life along the Silk Road.

Department of Anatomy bioarchaeologist Dr Rebecca Kinaston recently returned from a month-long trip to the village of Xo’Janqo in southwest Uzbekistan, located along the ancient trade route connecting East Asia to Southern Europe.

On an earlier trip to the area in 2017 she had been approached by a local farmer to examine skeletons exposed by erosion in the soil in his backyard, leading her to carry out excavations this year with the help of Ladislav Damasek from the Charles University in Prague.

Dr Kinaston said it was an "honour" to be given community permission for the work, which was funded by an Otago research grant.

She also carried out work on a nearby "tepa" or dirt mound made from human settlement.

Radiocarbon dating on the skeletons in the cemetery placed the site between AD700 and AD1200.

"We keep doing this work because it’s like solving a mystery. Every site is completely different — you don’t know what you’re going to find when you show up."

Lesions on skeletons gave clues about health and disease, skulls and pelvises could be examined to determine age and sex, and isotope analysis and ancient DNA study provided insight into diet, health and ancestry.

"These people lived on oases and we’re really interested in looking at how people adapted to these harsh desert environments and also how they interacted with each other."

Full laboratory results are not available yet — but initial ones have shown evidence of degenerative joint disease of the spine and other joints, even in young people, which indicates they had a heavy workload.

Something which had surprised her was the presence of "massive" men, who at about 177cm were very tall for the place and time.

"We found a number of healed fractures of the forearm and ribs, possibly suggesting interpersonal violence, but also indicating a level of care within the community as these were well healed."

She speculated violence could have increased in the area after the forces of Genghis Khan came through.

Dr Kinaston plans to publish her full results by June 2020.