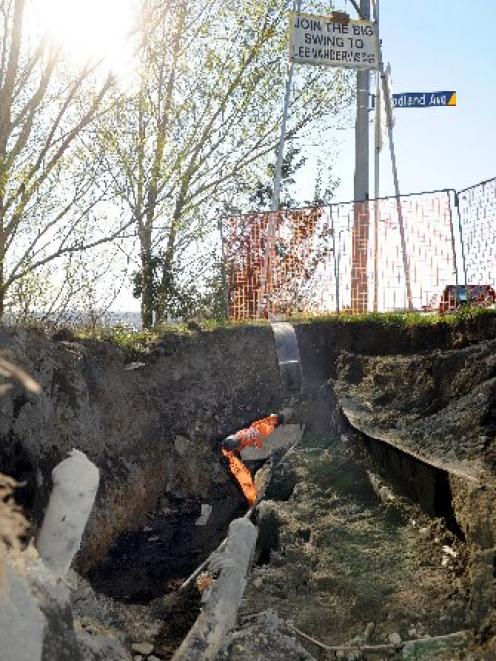 High-voltage cables near Mosgiel are being repaired, after damage caused by a volunteer installing an election sign for Dunedin mayoral candidate Lee Vandervis over the weekend. Photo by Stephen Jaquiery.
Dunedin mayoral candidate Lee Vandervis says it is lucky nobody was killed, after a volunteer installing one of his giant election swings sliced into a buried 11,000-volt power cable near Mosgiel.

The damage occurred on Sunday as one of Mr Vandervis' volunteers hammered in a steel pin to secure one of the large metal election swings - holding signs promoting Mr Vandervis' mayoral bid - beside Quarry Rd, Mosgiel.

The cable failed a short time later, at 1.04pm, cutting power to 747 consumers from East Taieri to Taieri Mouth for 40 minutes, a spokesman for Dunedin-based lines company Aurora Energy confirmed.

The site was one of the Dunedin City Council's designated election advertising sites, but the Aurora spokesman confirmed there were no warnings in the area of the cable's presence 0.6m below ground.

"The potential for serious harm was present," the spokesman said.

Mr Vandervis said it was lucky nobody was killed, as another "few millimetres" would have been enough to trigger a shock up the pin that would have left his volunteer "as dead as a door-nail".

He blamed council staff for not warning candidates about the existence of the cable under its designated election advertising site and urged other candidates to use caution.

Council resource consents manager Alan Worthington said Mr Vandervis' sign did not breach election rules, but the existence of the cable had come as a surprise.

He would be speaking to Delta staff about the cable, and the "possible" existence of others under other election sites, and information would then be passed to candidates, he said.

"It's a bit of a surprise, given those sites have been used for quite a few elections now.

"We are in the process of finding out if there are any others scheduled sites that might have a cable under them," he said.

The cost of damage to the cable had not yet been determined, but it was possible Aurora would seek to recover costs from Mr Vandervis, the Aurora spokesman said.

When damage to the company's assets was caused by a third party "sometimes we like them to pay", he said.

Mr Vandervis said he would contest any attempt by the company to recover costs from him.