After years of close calls and dangerous situations, one Dunedin woman is now looking forward to crossing the street without worrying about her safety.

Fiona Russell, who is wheelchair-bound, said navigating the intersection of Hillside Rd and King Edward St in her electric wheelchair had been ''pretty diabolical''.

It was a frightening experience for someone who was not able to just leap out of their wheelchair, Miss Russell said. 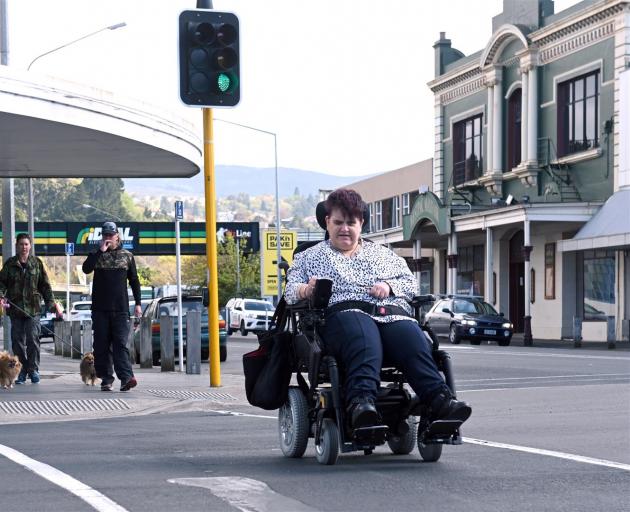 Wheelchair user Fiona Russell safely negotiates the crossing at Cargill's Corner in South Dunedin after the intersection was made much more accessible earlier this month. Photo: Linda Robertson
Often, her wheelchair got caught in the gutter at the intersection and she was unable to move out of the way of traffic when the lights changed.

Disability Information Service adviser John Marrable said modern wheelchairs such as Ms Russell's get stuck in the gutter at Cargill's Corner because of outdated legislation.

''Fiona's wheelchair is a very wide and heavy wheelchair and the legislation from 2001 doesn't suit the wheelchair.

''So you have contractors go to put a kerb ramp out and they follow the legislation, but it is totally impracticable.''

While Ms Russell was looking forward to no longer risking getting snagged in the gutter, she feels the lights at the intersection did not allow enough time for a wheelchair user to cross.

''It's going to be much easier, but I wish it was a Barnes Dance.''

A council spokeswoman said a Barnes Dance would create longer traffic queues and there were not enough pedestrians to justify installing the crossing system.

Ms Russell challenged that decision, pointing out the traffic lights further up Hillside Rd were installed to help blind people.

South Dunedin had more disabled people than elsewhere in the city and Cargill's Corner presented a major challenge for many of them, she said.

Mr Marrable said he had been helping the council and contractors understand the issues people in wheelchairs encountered at road crossings.

Thanks to people like Ms Russell lobbying the council, change was slowly happening, he said.