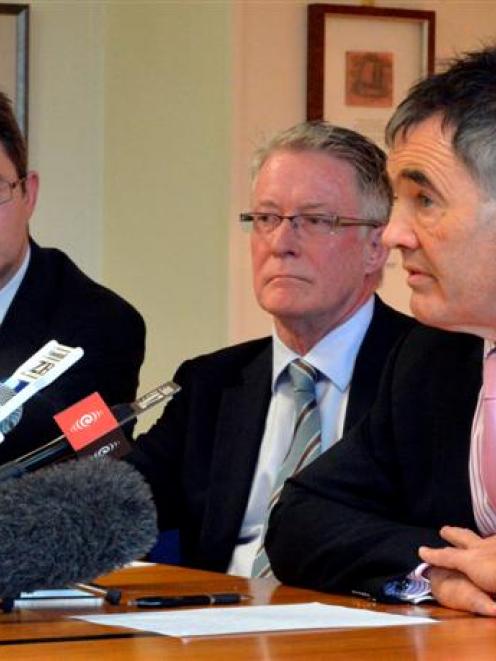 The size of the total losses to the council was finally confirmed by Mr Cull at a packed media conference yesterday, days after the deal to sell the ground to Calder Stewart went unconditional.

New details of the sale agreement with Calder Stewart were also revealed. The company has been given up to three years to pay for Carisbrook, as and when parts of it are subdivided and sold.

The $3.3 million sale to Calder Stewart meant the council would recoup $4.7 million of the $7 million it spent buying Carisbrook and surrounding properties from the Otago Rugby Football Union in 2009.

That left a $2.3 million cash loss for the council, which would rise to about $3.5 million if other bills - including maintenance, interest and other holding costs accrued while it was the owner of Carisbrook - were included, Mr Cull confirmed. 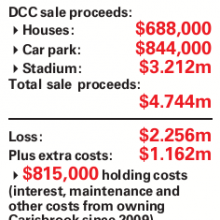 However, he refused to point the finger of blame over the loss yesterday and defended the deal with Calder Stewart, insisting the council had no choice but to ''cut our losses''.

The result was ''not ideal'', but, faced with annual holding costs of $270,000 a year from owning Carisbrook, the sale would at least stop the council ''haemorrhaging'' money, Mr Cull said yesterday.

''We went out and got the best deal we could on the market ... We had to cut our losses.

''We were losing money all the way through. Now we have stopped losing money. That's a good thing.''

Council city property manager Robert Clark said the result reflected the ''huge impact'' of the global financial crisis, which had knocked buyer confidence around the world, including in Dunedin.

Despite that, council chief executive Paul Orders said the council could not afford to wait for a better market.

''The reality is we were carrying, as a council, a stadium which was surplus to requirements. In other words, that's a liability,'' Mr Orders said.

Mr Cull said he voted against the Carisbrook purchase when a city councillor in 2009, but was outvoted in a bid to ensure the Otago Rugby Football Union was a viable tenant of the new Forsyth Barr Stadium.

The decision was made after two independent reports valued the stadium and surrounding properties well above $7 million.

Copies released yesterday showed Chapman Consultancy had, in April 2008, put the package's value at $9.02 million, while DTZ had, in February 2009, estimated its value at $8.345 million.

A third valuation more than two years later in December 2011, also by Chapman Consultancy, put the value of the stadium alone - excluding the other properties - at $7.5 million.

In the end, the council received less than half that for Carisbrook, and just over half the original valuation for the entire package.

Despite that, Mr Cull was reluctant to criticise the valuations, saying they were ''valuations ... not promises''.

The estimates had ''clearly'' been proven wrong, but there were ''a whole lot of decisions here that led us into that situation'', he said.

As part of Calder Stewart's purchase deal, the company paid a $200,000 bond to the council, to be repaid if the site was largely cleared within six months.

That was designed to encourage development of the site.

The company would have up to three years to pay the $3.3 million sale price to the council.

The company was expected to subdivide and sell the property for industrial use, and would give 60% of the proceeds from each sale to the council, together with 5.5% interest each year, Mr Cull said.

Any shortfall after three years would be made up by the company, meaning the council's sale proceeds were guaranteed, Mr Cull said.

The deal gave the council a better result than an earlier offer by Calder Stewart to pay $3 million cash up front, and would also put an end to holding costs, he said.

The figures do not include an earlier $2 million loan from the council to the ORFU in 1997. Mr Cull said the loan had been accounted for.

It had been repaid by the ORFU at the time the council bought Carisbrook in August 2009, and the cash was then used by the council as part of the financing to buy the stadium from the union, he said.

That meant the council only had to borrow $5 million to fund the $7 million purchase, he said.