Calder Stewart has filed a resource consent application with the Dunedin City Council to begin phase one of the site’s development, it was confirmed yesterday.

The company wants to build a single-storey, 3875sqm industrial warehouse, together with a 302sqm office, plus a yard, car parks and vehicle access.

The identity of the tenant is not yet known, but is expected to be revealed soon. 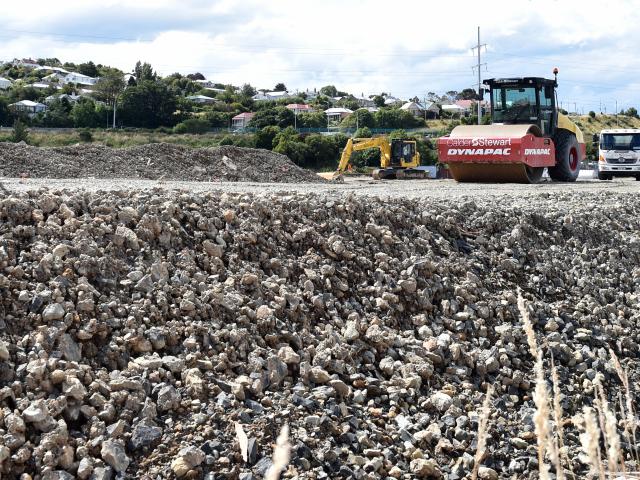 Heavy machinery at work on the Carisbrook site. Photo: Peter McIntosh.
If approved, the development would be "one of the single largest brownfield industrial sites in Dunedin", an accompanying report by Ryder Consultants, for Calder Stewart, said.

"The proposal is the first phase of the redevelopment of the site ... which will directly support future industry in Dunedin," it said.

The new facility would occupy one corner of the site, extending northeast from the Burns and Neville Sts intersection, opposite the Auto Court Dunedin car yard.

The proposal was a restricted discretionary activity for the industrial-zoned site, and was being considered on a non-notified basis.

If granted consent, the finished facility would be leased to an industrial "anchor tenant" while attention shifted to the development of the rest of the site, it said.

Construction was expected to begin later this year, although Calder Stewart staff were keeping their cards close to their chests yesterday.

Calder Stewart development manager Kevin Arthur, contacted by the Otago Daily Times, said he could not yet reveal the name of the tenant or discuss other details.

"We’re under a confidentiality arrangement with our client. I’m not really at liberty to say anything more than what’s in the public document.

Despite that, Dunedin Mayor Dave Cull welcomed the progress, saying he was "pleased" a proposal was on the table.

"It’s indicative of the heightened level of building activity and development activity in the city right now. It’s very pleasing."

The consent application ended a long wait for activity stretching back to 2013, when Calder Stewart bought the old ground from the council for $3.5million.

At the time, the company was given six months to demolish the old stadium, which Mr Cull said was intended to  prevent it becoming an eyesore.

The stadium was demolished before that deadline, except for the historic Neville St Stand turnstile building, but the site was then left while work progressed behind the scenes.

That changed late last year, when heavy machinery moved on to the site to begin site preparations, although it later emerged the company lacked the appropriate earthworks consent.

The consent application now before the council included a request for "retrospective consent" for the 8000sqm of crushed concrete and rock already placed on site.

An assessment of environmental effects, prepared for Calder Stewart by Ryder Consulting environmental planner Nigel Bryce, said the material was being used to "settle the underlying ground conditions" before construction.

The material would be shifted to another part of the site after three months and stockpiled, allowing development work on the corner site to begin, his report said.

The finished development would include four "vehicle crossovers", three off Neville St and one off Burns St, allowing for "drive-through truck movements flowing from the yard and on to Neville St".

The unloading of stock would be carried out inside the warehouse, using 5-tonne gantry cranes.

There would also be space for 38 car parks and landscaping, and the office would overlook the Neville St turnstile building.

A decision on the consent application was yet to be made.