By Cas Saunders
0 Comments
A Dunedin veterinarian says introducing cat controls is about the welfare of the animals, not killing them.

Veterinarians for Animal Welfare Aotearoa managing director Helen Beattie is trying to change the minds of those who are on the fence about the most recent push towards a national cat management strategy.

Dr Beattie will be explaining how her organisation is in support of a petition to the Government at a meeting at the Lake Wanaka Centre in Wanaka tonight.

The petition, if enacted into law, would require all cats kept as pets to be registered, microchipped and desexed — with an exception for registered cat breeders.

Dr Beattie said cats were a sentient species and she believed the country collectively cared about their welfare. However, some people had lost the ability to think objectively, she said.

"I’m absolutely a cat lover, but I can also see that we need to do better for cats."

The issue of introducing cat controls to combat predation and other nuisance behaviour had been in and out of the limelight over the years and many experts had noted a lack of legislation like there was for dogs. 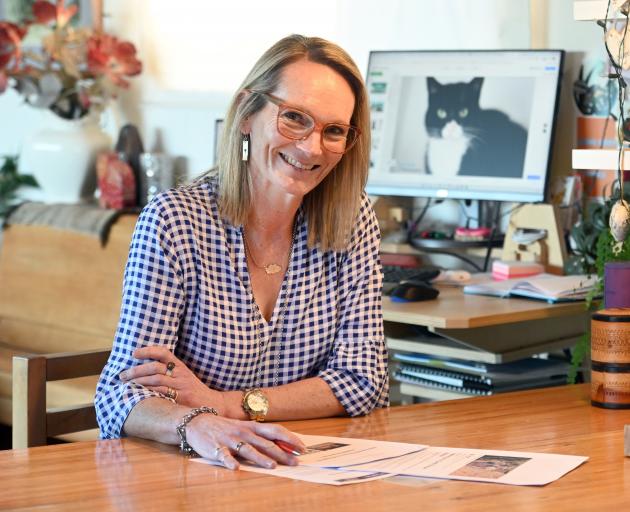 Dunedin vet Dr Helen Beattie works on her presentation about cat controls which she will give in Wanaka tonight. PHOTO: LINDA ROBERTSON
In 2020, the national cat management strategy was updated and relaunched to include new research from local sources, she said.

It included a trap, neuter and release strategy, which could help address feral and stray populations.

She said if stray or feral cats were caught and euthanised it would not help as cats were territorial and other colonies would fill the gap that was left.

"One of the things we need to understand is it’s not just one part of the population we need to think about," Dr Beattie said.

The public needed to think of stray, feral and pet cats as one population in order to address the issue.

She said the proposals would help to prevent the cat population from getting to a point where cats would have to be euthanised.

"I don’t want to be the veterinarian who has to be responsible for the death of those cats," she said.