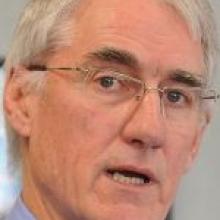 Athol Stephens
The Dunedin City Council is cautious about working with a new local government funding agency being established by the Government, fearing it could find itself saddled with other councils' debts.

A Bill to be presented to Parliament shortly proposed establishing the New Zealand Local Government Funding Agency (NZLGFA), which would operate as a large-scale borrower and then lend to councils.

However, Dunedin City Council acting chief executive Athol Stephens said yesterday a clause contained in the proposal would require councils using the agency to share liability for all debts.

The "joint and several guarantee" meant any council defaulting on a repayment obligation would leave other councils to pay the outstanding debt, he said.

"To a degree, you become both the borrower and the lender. That doesn't get rid of the council's risk.

"I don't see that as an attractive feature of it at all, really," Mr Stephens said.

Among councils indicating they would work with the new agency was the recently-established Auckland Council, which had sizeable projected debt levels intended to pay for infrastructure development.

The risk was considered "remote", with no council in New Zealand having ever defaulted on debt repayments, Mr Stephens said.

"But if it does happen, then I would prefer the risk to be passed off to the lending bank.

The council's existing arrangement - using a dealer panel co-ordinating banks to fundraise from habitual investors - was preferable, he believed.

The council was able to secure attractive rates with the help of its AA stable credit rating from Standard & Poor's, he said.

New Zealand investors could include individuals but also organisations like the Accident Compensation Corporation and superannuation fund managers AMP or Tower, he said.

"We go to habitual investors because they accept a much, much lower rate of interest, so the costs are reduced for the ratepayer accordingly.

"At the moment we've got a pretty streamlined, decentralised, efficient, flexible, nimble, low-cost system running. We're not sure that this [funding agency] is going to add any efficiencies to it."

The scheme - endorsed by Local Government New Zealand - would be optional, with councils able to choose whether or not to participate.

DCTL chief executive, John King, could not be contacted yesterday.

Elsewhere, of other councils contacted, Waitaki District Council chief executive Michael Ross said the new agency did not really apply to his council, which had virtually no external debt.

While the council needed to fully study the details, Mr Ross said it was a "net investor", its funding policy allowing it to borrow internally from reserves and depreciation accounts at an interest rate lower than that from a bank.

Central Otago District Council chief executive Phil Melhopt said Central Otago would watch the development and make a decision on involvement closer to the time, after consulting with the public.