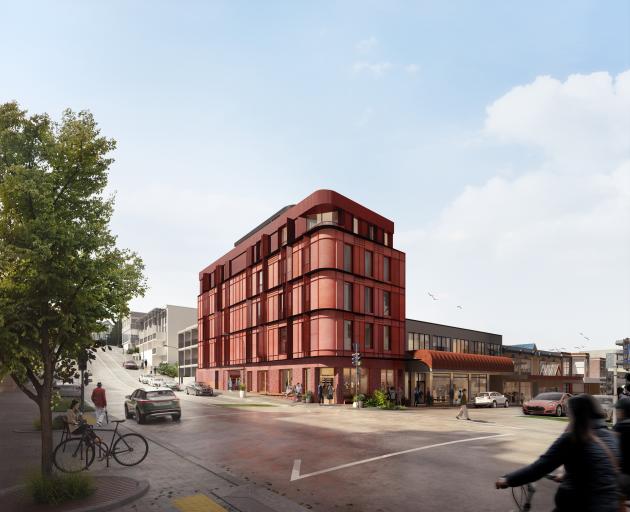 A conceptual plan of the Hanover Place apartment building approved for the corner of Filleul and Hanover Sts. IMAGE: SUPPLIED
The man behind a new apartment complex planned for Dunedin’s centre city hopes it will set an example for inner-city living.

The five-storey building at the corner of Filleul and Hanover Sts has been granted consent by the Dunedin City Council but is subject to an appeal period ending early next month.

At present the site is occupied by a pre-1900s brick building used by No8 Distillery, which has a short-term lease.

A lot of what was on offer was small and low quality, he said.

Many people wanted to live a low-carbon lifestyle where they could walk everywhere easily, but they did not have many options.

The complex, titled Hanover Place, had 16 mid-to-high-end apartments that would fill that niche.

He hoped it would inspire people to build other apartment buildings, he said.

The building would be across the road from Ebb Dunedin, a boutique hotel that Mr Cazemier is co-founder of which opened last year.

Sustainability was an important part of the project, as the building industry contributed significantly to global greenhouse gases.

Hanover Place would be built from timber and steel as opposed to concrete, and designed with energy- and water-efficient systems.

The ground floor would hopefully be leased out to a cafe, which would allow the public into the space.

Building would begin next year and hopefully be completed by mid-2024.

Sales for the apartments would open later this year, he said.

Resource consents were also issued by the Dunedin City Council in March for apartment buildings in Great King, London and Leith Sts.

Dunedin desperately needs more inner city apartments, but come on ! This involves demolishing the last remaining building on that block with any history or redeeming features. If there is one thing that makes Dunedin unique it is it remaining stock of such historical buildings and these need to be protected like the prodigal daughter. Once gone, never coming back. Choose another nearby site, any other site.

I hope the prospective residents are comfortable with a little noise late at night. This is the CBD, not a quiet residential neighborhood. More residential activity in town will just serve to squeeze any remaining night life out of the city.