A celebration of steampunk 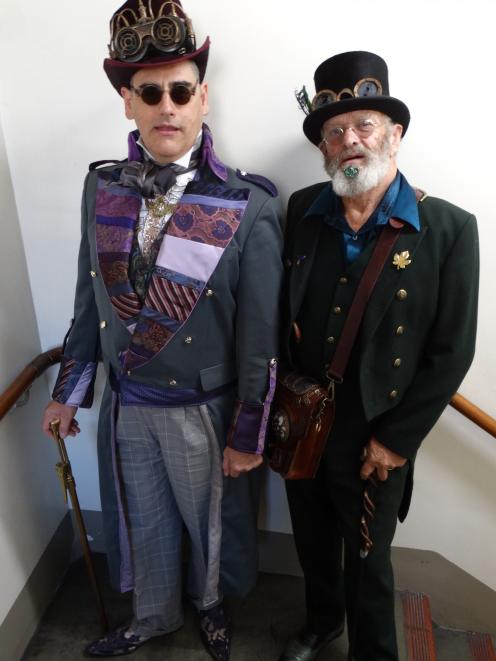 Dunedin steampunk aficionados Captain Roscoe Dangerfield (Ross McKay, left) and Lord Lucerne Thistledown (Richard Moore) look forward to being ‘‘steamed up’’ for this weekend's Decade of Steampunk in Dunedin Festival. PHOTO: BRENDA HARWOOD
Dunedin’s vibrant steampunk community will be dressed up in ‘‘full steam’’ and out in force at the Dunedin Gasworks Museum today.

Both have been involved in steampunk - which features Victorian-inspired fashion with a science fiction twist - for several years and enjoy its creativity, learning and sense of fun.

‘‘I used to be quite shy, but being involved in steampunk has given me much more confidence,’’ Dangerfield said.

‘‘Because of steampunk, I have performed in plays, sung in shows and been in photo-shoots for national magazines,’’ he said.

There are 30 to 40 people involved in Dunedin’s two steampunk groups - the Dunedin Gasworks Guild of Gadgeteers - Steampunk Dunedin and The Dunedin Steampunk Society.

The Gasworks Guild of Gadgeteers - Steampunk Dunedin was created 10 years ago to help support the Gasworks Museum.

Guild members enjoy dressing up in‘‘full steam’’ to take part in community events, providing a splash of colour and character.

The 10-year history of the Guild of Gadgeteers will be celebrated during the Decade of Steampunk in Dunedin Festival which will run from April 24 to 26, at the Gasworks Museum.

Steampunk fans from throughout New Zealand are expected to travel to Dunedin for the festival.

And during this year, steampunk will be visible in flash mob events such as steampunk high teas, duelling displays and promotional events.