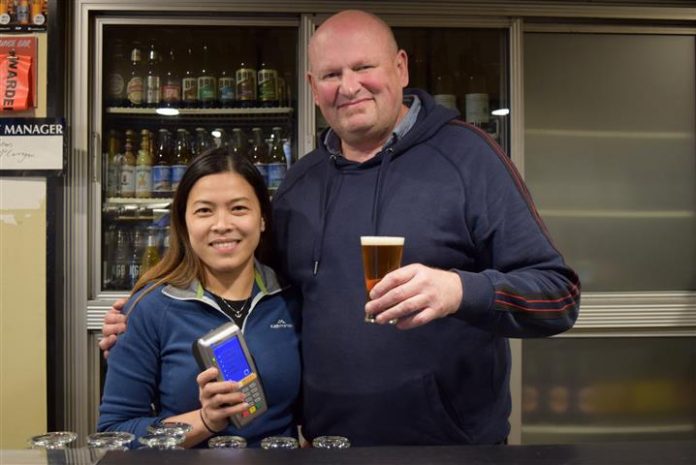 Heff's Hotel co-owners and partners Liezel Ignacio and Sean McCarrigan are happy to be serving patrons in their South Dunedin pub since Covid-19 restrictions were lifted. Photo: Shawn McAvinue
It’s good to be back and a step closer to much-needed normality, a South Dunedin publican says.

“It was good to see them _ I appreciated them coming because they are all good people.”

Many of the loyal patrons were elderly and the pub was a place where they socialised, he said.

“They enjoy coming down having a beer with their mates – it’s their outing for the day… they have become like our surrogate de facto families.”

During lockdown, he called many of the loyal patrons to check on how they were going.

The number of patrons on the first night back was on par with a regular Thursday night but more people visited the bar on the first afternoon back, due to the “novelty factor”.

Although patrons were allowed back, the way they were served was different.

Patrons had to provide contact tracing information, use hand sanitiser and could not order a drink from the bar.

Some patrons were finding the change “difficult” as it was a habit to talk to staff behind the bar.

Under the new restrictions, the patron had to be seated and wait for a server to come and take their order and provide a mobile contactless payment option.

The changes required more staff to be working, which increased the overheads of the business, he said.

“It’s a little bit challenging at times but it is what it is.”

He praised the response by the Government to the pandemic but he wanted “to get back to trading as normal reasonably quickly because it’s hurting us financially”.

During lockdown, the wage subsidy helped and his landlord had been good but he still had to pay fixed overheads, such as a $1900 monthly power bill, without any revenue coming in.

He was optimistic the business would “bounce back”.

“It’ll take time to build it back but I think we’ll get through.”

Heff’s Hotel patron Cyril Tibble, of South Dunedin, said it was nice to be able to enjoy a drink again in the bar.