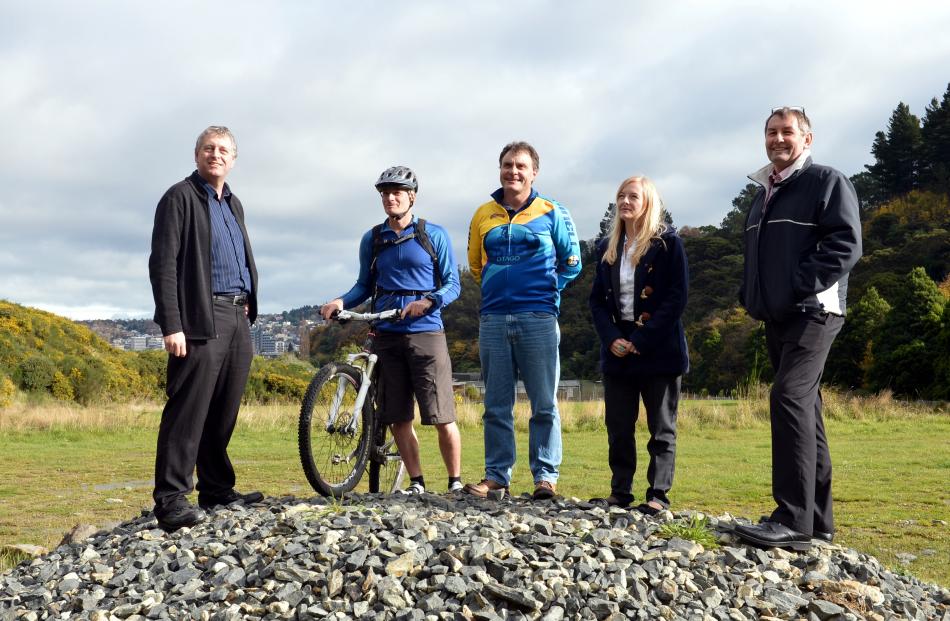 Representatives of Logan Park High School and the sports clubs that have come up with a joint proposal to develop a sports hub on land behind the school (from left) Mike Eathorne-Gould, from Dunedin Gymnastics Association; Hamish Seaton and Chris...

Support has been sought from the Dunedin City Council for a large new joint sports hub development behind Logan Park High School.

The sports hub would involve upgrading roads and street lighting, a lit multi-use artificial turf, a new gymnasium and shared amenities, including parking and grass event area. It

would be used by Otago Hockey, the Dunedin Gymnastic Academy, (DGA) and Mountain Biking Otago (MBO) and could be used by the school and other sports.

DGA and Otago Hockey and MBO presented their early plans for the hub to the council yesterday.

DGA treasurer Michael Eathorne-Gould said the organisation had been working with the council for three years on what to do about its existing main venue, the ageing Caledonian Gymnasium - which needs significant upgrading and earthquake strengthening and is too small for the growing requirements of the organisation - and how to secure a future site.

''[We are] pleased to say, after a long time, we now think we have found a place suitable for our gym development.

''We ask if the council considered selling the Caledonian Gym and/or bowling club that you look at retaining some of that profit for this project.''

To questions from the councillors, the group said it would lease the land, owned by the school and the Ministry of Education, for a small amount, and was

looking at partnerships to build and own the facility.

Many sites, including the Edgar Centre, Sunnyvale Sports Centre, Badminton Hall and the Ice Stadium, had been investigated, but the hub needed a site available 24/7 and a new purpose-built facility was by far the best option.

The Otago Hockey manager, Rachel Minton-Smith, said the organisation wanted the extra turf space because it did not have enough capacity at

Logan Park, and the situation was only going to get worse as the sport increased in popularity.

The proposed turf would be a practice turf only and not just for hockey use. It could be used by touch, league, rugby and futsal. Schools could use the area during the day and, in summer, several sports could use it. The surface could also be used for car parking.

It would be a great benefit to the community and it had been refreshing to share the same vision with DGA and MBO. It would be great to be able to share ideas and start working together with other sports, she said.

MBO president Chris Arbuckle said the organisation had already been in discussions with the DCC about its plans for new roading, car park and club rooms, and had raised $50,000 for that work.

The project was still in the early stages of discussion, but all the parties had committed to advancing it to a scoping document, which could be presented to other interested parties and key funders.

The next step would be getting funding to commission a feasibility study.

Council staff have said they were keen to see the feasibility study carried out for the development of the hub.