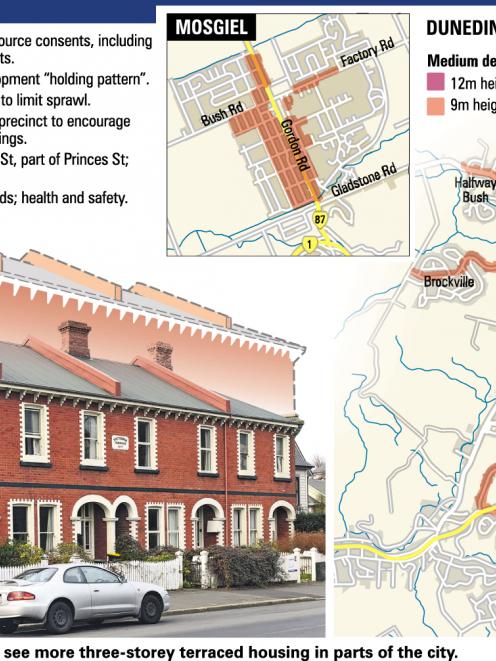 Click graphic to enlarge
Developers could soon be encouraged to build up, not out, as the Dunedin City Council considers new rules to shape the city's future. Chris Morris reports.

Dunedin could be in for a facelift as traditional homes make way for taller terraced housing and apartment buildings in parts of the city.

The change aimed to tackle the challenges of the city's ageing population and was among proposals outlined by Dunedin City Council staff as they entered the next stage of work on the second generation district plan.

The council yesterday unveiled a list of preferred options for public feedback over the next six weeks, which would help shape the draft document to be released for full consultation and a hearing next year.

The plan, once adopted, would set rules that shaped the city's development for years to come.

In the meantime, options to be considered covered a lot of ground - from throwing open the doors of listed heritage buildings to retail tenants, to relaxed rules for backyard granny flats and even changes to the humble garden fence.

Elsewhere, the new plan could apply the brakes to development in South Dunedin, at least until the threats posed by climate change were assessed.

It could also set a new limit on urban sprawl, restricting development beyond an urban-rural boundary until needed - and allowing it only in certain areas of pre-approved rural land.

However, among the most significant proposals was the creation of a medium-density residential zone across parts of the city, council city development manager Dr Anna Johnson told the Otago Daily Times.

The zone would sprawl across City Rise, the inner-city residential area below the Town Belt, residential areas around the campus, parts of Caversham and Mosgiel, and also along some public transport routes.

It would replace the older existing residential 1-4 zones and within the new zone, two key changes could help reshape the city.

One was a change to height limits within the inner city, on the central city side of the Town Belt, Dr Johnson said.

While outlying parts of the new zone would stick to an existing 9m building height limit, the inner-city part would allow taller, 12m-high buildings.

The extra 3m would allow two-storey buildings to become three storeys instead, she said.

The change had been proposed after talks with developers about how to encourage redevelopment within the inner-city areas of the new zone, Dr Johnson said.

The council wanted more terraced housing and apartment buildings in inner-city areas, to help tackle the expected surge in demand for smaller housing units over the next few decades, she said.

It expected 7600 new units would be needed by 2031 to house the city's ageing population.

Dr Johnson said the change was not a radical departure but would help tackle a key issue facing the city.

''The plans are very much focused around keeping the character of Dunedin the way we know and love it, but ...

trying to get some new housing stock in the city and nudging things along to enable that to be economic,'' she said.

Another key change that could help was a proposal to allow more than one residential unit to be built on each site within the medium-density zone, she said.

Developers would be able to squeeze one habitable room on to each site for every 45sq m of land available.

The change meant more of each property could be covered by buildings within the zone, although not completely, she said.

As well, restrictions on ''granny flats'' - as well as garages - would be eased across residential areas, allowing them to be built without resource consents as long as set standards were met, she said.

The intensification of land use would be balanced by rules protecting neighbours from shading and restricting the use of impermeable surfaces such as asphalt driveways on the ground, she said.

The council would not set architectural themes for new, higher buildings, but would establish minimum standards to ensure the new buildings were ''sympathetic'' with their surroundings, she said.

While inner-city zones housing more people were within walking distance of the central city, outlying parts of the new zone had been identified based on their proximity to public transport, she said.

However, the flip-side to the intensification push could be limits on how far the city could spread. That included a proposal for a ''figurative line'' between residential and rural areas, beyond which urbanisation would not be permitted, she said.

The change aimed to encourage infill development within existing city limits, to contain the rising costs that came with sprawling expansion and demands for new roads, water pipes and other infrastructure, she said.

The council also planned a city-wide analysis of potential greenfield sites beyond the urban boundary, which would identify which areas were most suitable for future development and which were not, she said.

Landowners left out in the cold would be unable to rezone their rural land for development, while those earmarked for future expansion could have restrictions on their land use in the meantime, she said.

For example, farming could continue on rural land earmarked for development, but a new forestry plantation could be prohibited because of the cost of readying the site for development later.

The change would offer ''more certainty'' to landowners, meaning they would not be encouraged to take the risky and expensive option of ''testing the waters'' by seeking consents or rezoning, she said.

The final version of the new district plan would identify areas for future development - as well as those ruled out - and detail the ''triggers'' that would activate their use, she said.

''We have spent a lot of time talking to the development community about this and why we are doing it.

''The main thing is people want certainty, and they can accept our job is to do what's best for the whole of Dunedin,'' she said.

South Dunedin would be placed in a holding pattern, preventing increased development, while the area's water management issues were studied in more detail, Dr Johnson said.

There was continuing uncertainty about what climate change and sea-level rise would do to the low-lying area's already high water table, which meant the council would be ''holding the status quo'' while more work was carried out.

That meant relaxed rules allowing granny flats to be built without consent elsewhere would not apply in South Dunedin, she said.

Heritage buildings would also face changes under the proposals, including rezoning the warehouse heritage precinct from the ''nonsense'' of large-scale retail to a mixed-use approach.

It was hoped that would encourage the refurbishment of the area's listed heritage buildings, which would be allowed to house retail tenants, she said.

The designation of some areas as townscape precincts would be scrapped, leaving only heritage precincts, and precinct rules would apply only to character-contributing buildings, she said.

That would make it easier for owners of ''some 1980s monstrosity'' within a heritage zone to redevelop or replace it without having to clear the same hurdles as a heritage building owner.

''We are making the rules smarter.''

The suggested changes were among a host of initiatives spelled out in the documents, which would be available on the council website from today.

Other changes to be considered included making it easier to install wind turbines on homes, reducing the maximum height of fences and ensuring the protection of the city's shop-front - George St.

Public feedback would run for six weeks, including 11 community workshops across the city this month, before a draft plan was released for full public consultation next year.

Dr Johnson encouraged members of the public to have their say.

''This is the time where we can still change things. Nothing we've put out is set in stone.''