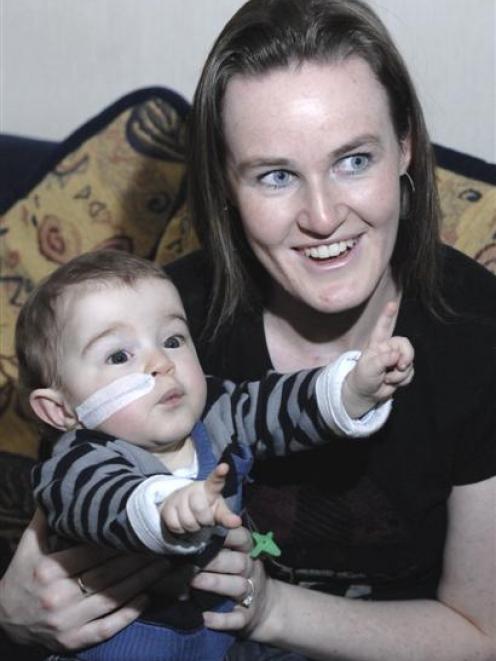 Only a feeding tube gives away the fact the health of Dunedin toddler Reuben Jones (1), with his mother, Marianne Lind, is not all it could be. Photo by Linda Robertson.
For most of his life Reuben Jones' heart condition will probably be invisible to others.

But since being born prematurely, his health has been all-consuming for his family.

The Dunedin boy is one of 450 children each year who undergo open heart surgery at Auckland's Starship Hospital.

It is Heart Children Week, and Reuben's mother, Marianne Lind (29), wants people to be aware of how crucial support is for families with heart children.

One of the birth defects he had as part of the syndrome was multiple holes in the heart.

Reuben's pulmonary artery was surgically fitted with a band during open heart surgery at Starship when he was about 6 months old.

The band seems to be working and some of the smaller holes are closing, but the larger ones will need to be surgically closed.

Reuben, who is Ms Lind's first child, must weigh at least 8kg first and the constant battle to get him to put on weight adds to the constant worry felt by Ms Lind and partner Glen Jones.

Reuben faces the prospect of at least two major operations.

Ms Lind said before she had a heart child she was not aware of people in the community dealing with heart children. After Reuben was born, she was surprised how many families were affected.

Because heart children appear normal from the outside it was easy not to appreciate the trauma families suffered after learning their child had a heart condition, she said.

But dealing with it would have been much harder without the support of Heart Children New Zealand, which had supported them since Reuben's birth.

It had put her in touch with other families dealing with the similar issues, provided advice, assistance for flights and support while Reuben was in hospital, she said.

"We've met lots of new people. There's even a weekly coffee group. The support network there is amazing," she said.

Bronny Finnerty, the regional family support co-ordinator for Heart Children New Zealand said the money raised from Heart Children Week, including a street appeal being run in Dunedin today and a "Cuppa for Kids" event on Queen's Birthday weekend, would fund the ongoing support services the organisation provided, both at Starship and when families returned home.