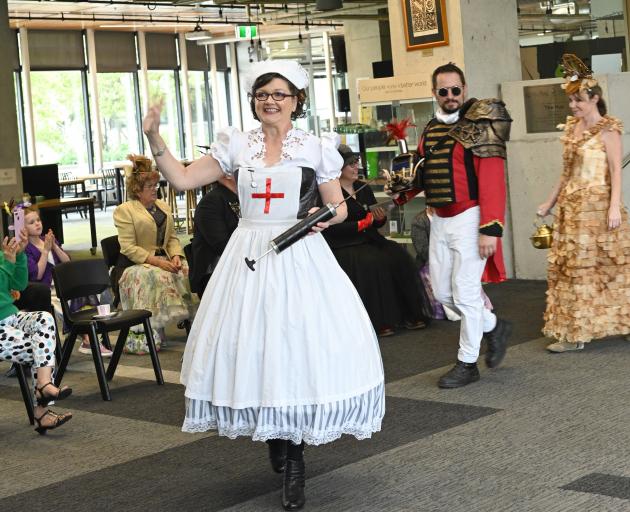 Costumes inspired by nurses, military figures and Willy Wonka were all on display on the runway at the charity event.

Designer Michelle Webb presented eight looks during the show, which was capped off by an Absinthe Fairy costume which won an award for best evening wear at Oamaru’s steampunk fashion awards.

The event was set up to raise funds for the Tea Time Me Time charity, which advocates for self care for healthcare workers.

Ever since receiving her first sewing machine at age 8, Ms Webb said she had been sewing artistic clothing, and the pieces displayed yesterday were true labours of love.

Consider tea-themed Darling Darjeeling. More than 700 teabags went into constructing the delicate floor-length gown, accessorised with a brass teapot and a fascinator made from souvenir teaspoons and a cup and saucer.

Ms Webb said the well-steeped couture took three months to make — not uncommon for her pieces.

A small but enthusiastic crowd of about 20 were present for the fashion show, many of whom were themselves dressed in their most splendid steampunk attire.

Tea Time Me Time founder Vicki Yarker-Jones said healthcare workers such as nurses were dedicated to caring for their patients, but this often came at the expense of neglecting to take care of themselves.

Her organisation hosts afternoon teas for nurses and other health workers to help promote the self-care message.

The event raised more than $400 for the charity.