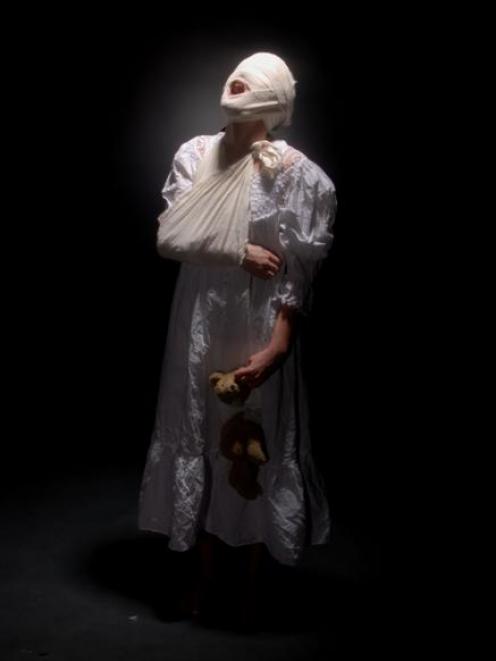 One of the 30 photographs taken by Ashlee Carr for her NCEA level 3 Visual Arts paper. Photo by Ashlee Carr.
The horror endured by 3-year-old Nia Glassie during her short life had a profound impact on former St Hildas Collegiate School art pupil Ashlee Carr.

So much so, Ms Carr decided to highlight the prevalence of domestic violence through her love of art.

Reports about little Nia being spun on a clothesline, put in the clothes drier, subjected to Playstation wrestling moves and kicked in the head so hard she never woke up again, were a daily occurrence in the media in the latter half of last year.

The injuries eventually killed the little girl, and her mother's former partner Wiremu Curtis, and his brother Michael were found guilty of murdering her. Her mother, Lisa Kuka, was found guilty of manslaughter.

While the reports made for harrowing reading, Ms Carr said she drew inspiration from them and decided to use art to make New Zealanders aware of the sickness which is child abuse.

Ms Carr compiled a portfolio of about 30 photographs which "opens the doors" on child abuse in New Zealand, and submitted them last year for her NCEA level 3 Visual Arts paper.

Her portfolio gained an Excellence endorsement and has been the only one in Otago and Southland to be selected for the Top Art touring exhibition of art works by New Zealand's top secondary school art pupils.

Ms Carr said her exhibit was based on the work of artist Gottfried Helnwein, who showed the effects of war on German children by using bandages in his images.

"My exhibit has a message to share with people.

"Hopefully, it will get people to wise up to child abuse and how common it is in New Zealand. It's behind the scenes, behind closed doors, and [my exhibit] opens it up for everyone to see.

Her art work will be featured alongside those of about 50 other secondary school pupils from around New Zealand which will be exhibited in more than 30 venues throughout the country.

Ms Carr's artwork is touring as part of the North Island exhibit and is now at the Rotorua Museum (to April 17), Wintec School of Media Arts in Hamilton (April 22-May 1), Te Manawa in Palmerston North (May 4-8), Tairawhiti Museum & Art Gallery in Gisborne (May 11-15) and the Havelock North Community Centre in Hawkes Bay (May 18-22).

Secondary school pupil artworks has been shown at Kings High School in Dunedin and is now at the Queenstown Art Society Rooms until the end of today, at the Southland Museum in Invercargill (April 20-May 1), The Suter in Nelson (May 4-8), Marlborough Boys College in Blenheim (May 11-15), and Craighead Diocesan School in Timaru (May 18-22).

The touring exhibition provides an opportunity for secondary pupils and teachers to view the high standard of art produced in schools and provide an understanding of what is required to achieve Excellence in Visual Art at level 3.

Members of the public are encouraged to view the exhibition and see the quality of the art emerging from secondary schools.

Ms Carr said her portfolio would be displayed at St Hildas Collegiate once the North Island Top Art exhibition had closed.

She is now studying for a Bachelor of Fine Arts at the University of Auckland Elam School of Fine Arts with a view to a career in photography.