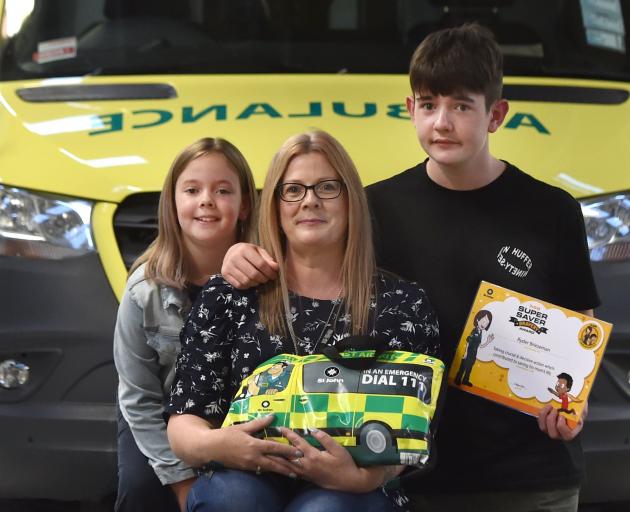 Siblings Ravyn and Ryder Brieseman stand next to their mother, Liana Gillan, after receiving bravery awards for saving her life. PHOTO: PETER MCINTOSH
Two Dunedin children have been honoured for their courage after quick thinking saved their mother’s life.

Ryder said his sister called out to him after she saw her mother collapse in the bathroom.

"I remember going into the bathroom, seeing her on the floor with her head facing down, and thinking it must be serious."

He quickly grabbed his cellphone and called for an ambulance.

"The call handler told me to check if Mum was breathing and check if she still had a heartbeat. I checked but I couldn't feel a heartbeat, so he told me to roll her over and start chest compressions.

"I remember having to shut my eyes because I didn't want to see what happened."

As Ryder continued with CPR, Ravyn called her grandparents who lived only a few minutes away.

Her grandfather, Dennis Gillan, said he took over the chest compressions until St John and Fire and Emergency New Zealand crews arrived.

"I was so impressed with both of them," Mr Gillan said.

The ambulance officers restarted Ms Gillan’s heart with a defibrillator and transported her to Dunedin Hospital, the spokeswoman said.

Ms Gillan spent 13 days in hospital and had a cardioverter defibrillator (ICD) inserted.

She was now back at work and happy to be able to spend another Mother's Day with her children.

"I don't think words can describe it. I'm just so proud of them."

She encouraged parents to talk to their children and make a plan in case of an emergency.