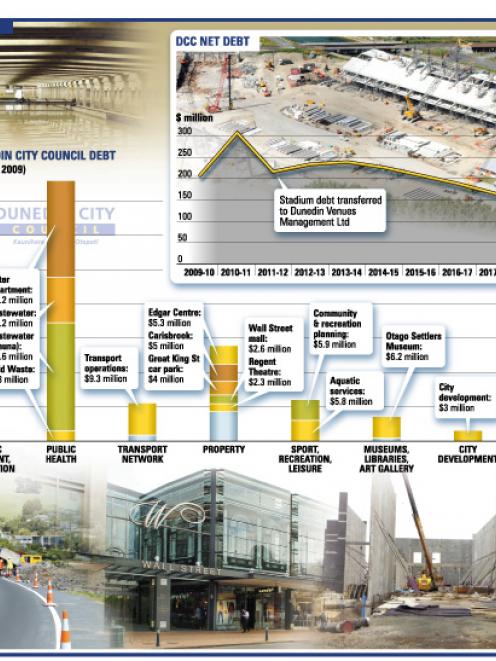 At some point in the next financial year, the Dunedin City Council's total debt will reach its forecast peak of $360 million.

The graph that tracks the rise looks a lot like a mountain and the city, with a population of 118,683, is yet to reach the top.

As of November 30 last year, the city owed $202 million and as of next year, the council will break through its self-imposed 8% limit on the ratio of interest to total revenue.

A gentle downward slope follows from 2013, and it is that slope that saves Dunedin from some serious discussions with the Auditor-general about the city's governance.

But council finance and corporate support general manager Athol Stephens said that downward trend had to remain in the city's financial forecast, meaning new spending had to be reined in.

"The big trick is to make sure that does happen."

The problem the city faces is that it could struggle to take on any major projects until the level of debt reaches a point where there is, as Mr Stephens has put it, "headroom" - a point that will not be reached, in his opinion, until about 2019.

When the Otago Daily Times put that problem to finance and strategy committee chairman Cr Richard Walls, he said the council had decided its priorities for the 10-year long-term council community plan.

If something urgent came up, the council would have to make a decision based on its merits, Cr Walls said.

"At the moment, there's nothing else on the horizon.

"Some people will look at the total [debt], and throw up their hands in horror.

"[But] Dunedin is sound, the economy is sound, and we have very good people managing our finances.

"Nobody questions debt when it's their pet project."

But Dunedin Ratepayers and Householders Association chairman Lyndon Weggery said the council should not have tackled all the projects on its books "one after another".

"They have to really bite the bullet.

"Any new council needs to look long and hard at council spending."

The major projects that have taken the city so far into the red include a much-needed revamp of water and wastewater infrastructure, and a list of projects for which a "much-needed" tag would, no doubt, spark furious debate.

Those include the Forsyth Barr Stadium, for which the council is raising $109 million; the town hall and Dunedin Centre projects, budgeted at $45 million; and the Otago Settlers Museum upgrade, which will cost about $20 million.

Dunedin's council is not the only one amassing large debts.

The Christchurch City Council's 2009-19 long-term council community plan states that at the end of that period, total debt will have increased from an opening balance of $240 million to $853 million.

At 348,435, Christchurch's population is almost three times Dunedin's, and its forecast rates increases are lower.

But the debate there is similar, with Canterbury Employers Chamber of Commerce chief executive Peter Townsend warning earlier this year the debt could become "a millstone round the necks of ratepayers".

In Hamilton, a city with a population of 129,249, Cr Roger Hennebry voiced concern in November the Hamilton City Council's debt had ballooned to $263 million, and he said the figure would rise to $735 million in nine years' time.

Asked to explain the reasons for Dunedin's debt, Mr Stephens said the main driver was the cost of upgrades to water and wastewater infrastructure.

The council would probably be carrying $140 million in debt by the time the work was finished.

Debt was also raised for the Otago Settlers Museum for its upgrade, an amount of about $20 million.

For the stadium, $59.5 million had been borrowed, and about $50 million was still to be raised.

That would be done over the next 20 months - until August 2011 - by which time the stadium was scheduled to be finished.

The Resource Management Act, Government and regional council standards and public opinion concerning the quality of water in rivers, lakes and the sea made it imperative wastewater treatment be upgraded.

The council wanted a secondary treatment plant at Tahuna, but not a long outfall.

"That added another $65 million to our debt."

"No-one really objects to that.

Then there were community expectations.

The council took ownership of the Otago Settlers Museum in the early 1990s, and the public expected it to be maintained well.

The Dunedin Centre, which was about 90 years old, had been maintained in an ad hoc way.

More conferences were being attracted there and those attending expected certain standards"By and large, we're happy to pay for those kinds of things."

"Our difficulty is [those costs] have tended to come all at the same time."

On the council's decision to break the 8% limit on the ratio of interest to total revenue, he said he was not concerned because "over the long term, we recover the situation".

"There's a downward trend [in debt]."

"I think it's fair to say we have a full house at the moment.

"It will require a commitment of following councils to make sure it does go away."

Standard and Poor's had recently affirmed the council's AA- rating and "stable" outlook.

It was not possible to pay cash for all the infrastructure projects the council had taken on.

The benefits of the projects would last for, in some cases, up to 100 years, and borrowing the money meant it was paid back by more than one generation, which was a fairer system, he said.

But Mr Weggery argued the reason the credit outlook was good was because the council always had the option of increasing rates.

"If the council gets into dangerous territory, it can go back to the long-suffering ratepayers and increase rates."

Asked when the city would have room to begin new projects, Mr Stephens said a conservative policy would be to get debt down to $150 million to $175 million, which would occur towards 2019.

"You're starting to get there then; $150 million to $175 million of debt would be a fairly conservative balance sheet."