By Molly Houseman
0 Comments
Seven animal portraits have been hidden among Dunedin city streets as a part of an urban safari.

And the artist has challenged people of Dunedin to go and find them.

A giant giraffe, which appeared on a building on the corner of Jetty and Crawford Sts in Dunedin earlier this month, was hard to miss.

That was the first work French artist Sophie Photographe had done in Dunedin.

The 12m tall giraffe, which she called Jeffrey, was rolled out during the Dunedin Street Art Festival.

But yesterday she took to Instagram to reveal there were more animals to find. 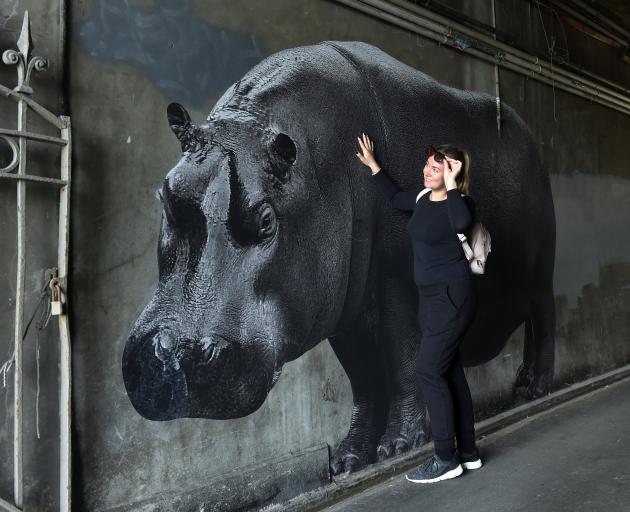 Moria Rogina (30), of Croatia, on her travels yesterday finds one of the animals French artist Sophie Photographe has hidden around the streets of Dunedin. PHOTO: PETER MCINTOSH

‘‘I hid seven animals in the city of Dunedin ... there are some clues in the video,’’ she said.

The challenge would be to find a hippo, pelican, camel, lion, llama, penguin and seal.

She said that when she arrived in Dunedin, she noticed walls that were ‘‘masterpieces’’ and perfect for her animal street art.

Her work focused on animals to raise the question of where they fit into society.

‘‘Repositioning their images in our daily lives is a militant act that allows us to think about their condition of being alive.

‘‘As if the animals came back to haunt our cities to see what we did with these urban cities from where we hunted them.’’