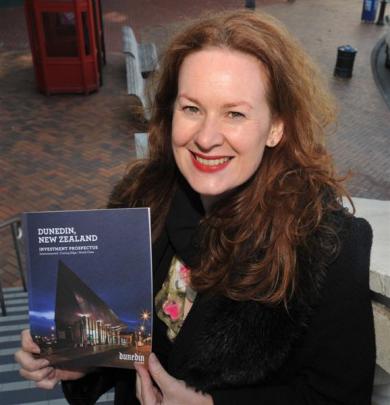 A new prospectus prepared by the Dunedin City Council is part of a city-wide push to target more ''high wealth'' national and international investors, the council says.

The 37-page guide unveiled this week highlights the city and its success stories, from individual businesses to the city's education sector, and is being distributed in print and online.

It has been prepared by the council's economic development unit to target investors across New Zealand and overseas, council business development adviser Chanel O'Brien said.

She told the Otago Daily Times that would include wealthy individuals in New Zealand or overseas who might be convinced to invest in Dunedin companies.

It would also target expats who might be interested in returning to New Zealand and setting up new companies in Dunedin or or in growing existing companies, she said.

''The end game really is about attracting people to Dunedin who wouldn't necessarily know what we have to offer.

The document had been prepared with help from members of Dunedin's investment panel, she said.

It was available online but about 3000 copies had also been printed, at a cost of $12,000, for distribution in New in Zealand and overseas, with help from New Zealand Trade and Enterprise and University of Otago staff. The initiative was part of a broader push improve the council's relationship with the business sector, under the banner ''Red Carpet, Not Red Tape''.

The report outlined key projects already under way to achieve that, including a pilot programme testing the effectiveness of appointing ''relationship managers'' within council to liaise with potential investors.

The aim was to assign such managers to help those behind bigger projects, primarily those worth more than $1 million. The council's city property staff were key players identifying potential projects and six had so far been identified, she said.

The council was also running a business clinic at Dunedin's central library, offering help with business ideas to members of the public, which was believed to be a New Zealand first. The city's investment panel had also been meeting regularly to help potential investors.

The Otago Daily Times reported in February that process had so far resulted in Chinese investors with plans for a $60 million international school selecting Dunedin as their preferred location.

The council was also considering a business survey to better align its services with business expectations, and a new communications strategy to ''quietly but intentionally'' change the focus of council staff when dealing with the public.

The report would be considered by councillors on Monday.