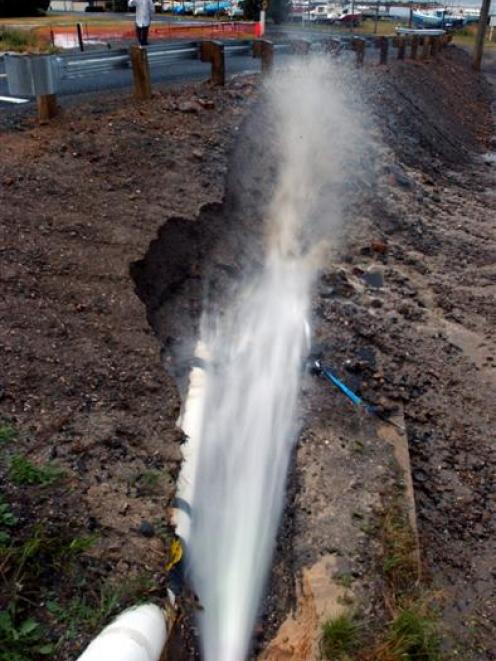 Burst water main in Magnet Street on Sunday night. Photo by Craig Baxter.
The Dunedin City Council is facing a billion-dollar bill to maintain existing water services over the next 50 years.

The forecast costs were outlined in the council's "3 Waters" strategy, along with a warning "trade-offs" would be needed - reducing funding for some non-essential water services - to minimise the effect.

The document, which aimed to direct future planning for water, stormwater and wastewater services to 2060, was released this week before consideration by the council's infrastructure services committee on Monday.

Councillors received a briefing on the contents by council staff on Tuesday, but Cr Fliss Butcher was so upset she walked out in tears.

The document warned more than 50% of the city's $1.4 billion network of pipes and other water infrastructure would need to be replaced by 2060.

That was expected to cost more than $820 million over 50 years, as large quantities of the city's infrastructure - some of it more than 100 years old - also expired within a similar time-frame.

When the anticipated cost of new water treatment infrastructure was included, the bill would rise to $1 billion to maintain current service levels, it said.

The 50-year funding forecasts were the cumulative total of new and existing spending, and meant the council's renewals funding would have to more than triple to $25 million each year in the short-to-medium term.

The council was spending about $7.5 million on renewals funding this year, which was already budgeted to increase to $19.68 million in 2019-20.

Mr Harland said the forecast increase to $25 million was an estimate and could change as more accurate information was received, for example about the exact condition of the council water pipe network.

"Twenty-five million [dollars] may not be the number - it could be more or it could be less."

Council water and waste services manager John Mackie said the challenges outlined in the document were "no greater or lesser than any other modern city", and believed they would prove to be manageable.

"We do believe we can maintain levels of service," he said.

The council has only been required to fund depreciation - to cover the eventual cost of replacing assets - since 1992, and funding levels have ebbed and flowed in the years since.

During last week's 2010-11 annual-plan hearing, councillors agreed to defer 100% funding of depreciation for water and waste services assets to 2017-18, saving about $6.6 million over the period.

The council would also need to consider "trade-offs" to minimise cost increases, with ratepayers asked through consultation to identify areas of water services "where customers may accept lower service levels".

The forecast bill did not include the anticipated costs of climate change and peak oil, which the report warned were also expected to add to overall costs.

Cr Butcher said the document showed the council's decision to invest in the Forsyth Barr Stadium, despite concerns held by some about the financial position of the council, was "coming home to roost".

She also accused staff of deliberately withholding details of the pending bill during earlier stadium deliberations.

"We should have had this information before we made the stadium decision, because it makes a huge difference."

Cr Cull said councillors were aware of work on "3 Waters", and the need for greater investment, but it was the first time a complete package containing an estimated bill had been tabled.

"Now that we have the numbers, they are probably scaring a lot of people, because they are big numbers."

Councillors were told "quite clearly" last year by council finance and corporate support manager Athol Stephens that borrowing for planned capital projects, including the stadium, would leave little "headroom" for new projects.

"There's always something on the horizon, and this is it . . .

"I think it's quite serious," Cr Cull said.

Mr Harland said he believed the additional costs, while indicative, would be affordable "later in the decade", when rates were forecast to decrease.

"I think, personally, there's some capacity to absorb some increases . . . no-one should be concerned or panic."

Mr Mackie denied there was an "agenda" to withhold the looming bill, while acknowledging the document was the first complete picture of future water infrastructure costs and other challenges councillors had seen.

Issues around depreciation funding and the development of the 3 Waters strategy had been "common knowledge" for years, he said.

"There's no agenda to withhold or not disclose it . . .

"I'm looking to do what's best for the utilities.

"The councillors and executive are challenged with making those decisions for the city."